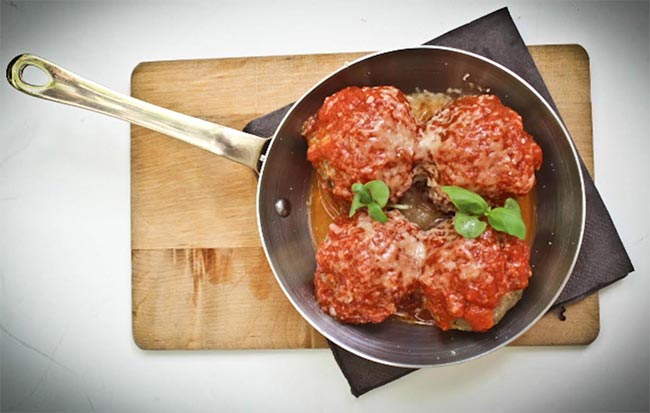 We've had burgers & lobsters, chicken & steak, cereal, porridge and more - now it's the turn of the humble meatball to get a restaurant all of its own. Something similar has gone down very well in the States, so it'll be interesting to see how Balls & Company compares.

So far, we know that the balls at the restaurant will all be served in Mauviel copper pans (see the pic above) and are definitely more extravagant than usual with "Wagyu beef", "Confit salmon" and "Quinoa, beetroot & feta" on the menu with sauces including ‘Romesco with red pepper, almonds, hazelnuts & garlic’. Plus they will sell trios of sliders in brioche for £8 too:

It's coming from Australian chef Bonny Porter, a finalist in Autralian MasterChef and who's worked here at the Arts Club and Village East. The restaurant itself will seat 30 on the main floor and 20 downstairs which will also have a basement bar. It's all being designed by Holly Pigott and Madeleine Girling - they're best known for stage set design - and we're very intrigued by the promise of a ceiling installation inspired by Anish Kapoor too. As for drinks, they'll have a small wine list (from £4 a glass, £10 a carafe and £20 a bottle) craft beers and jugs of sangria.

Balls & Company opens in June at 58 Greek Street Soho London W1D 3DY. For more from them, forllow them on Twitter @ballsandcompany.