May Fair Kitchen to open at the May Fair hotel 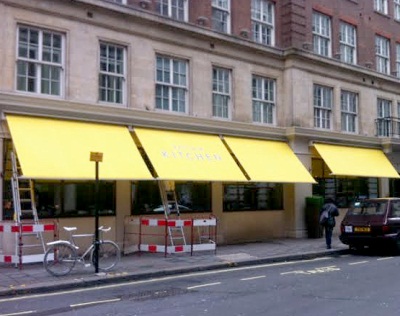 Eagle-eyed Mayfair workers this morning may have spotted something new about the May Fair Hotel. New awnings have just gone up on the hotel for a restaurant they're unveiling later this month. May Fair Kitchen will take over the space currently occupied by Quince on Stratton Street.

Quince will close after service on Saturday night and then emerge in around two weeks as a new destination seafood and grill restaurant. They'll be doing soft openings from around mid May with a view to opening at the end of the month.

Hot Dinners was given an exclusive insight into what's planned for the space. The current room which is a bit on the dark side, is going to be opened up with French doors leading on to the street. Style-wise it'll be given a complete makeover - imagine a luxury classic look, so more vintage Aston Martin than Lexus MPV.

A new team will be in place both in the kitchen and front of house, but rather than going the traditional celebrity chef route, the hotel has recruited from in-house and will be building buzz on the quality and provenance of their food instead. The main focus will be on seafood and meat and we like the sound of the dessert trolley they have planned with certain hot dishes cooked by your table.

As a hotel restaurant it'll still be an all day spot, but the Bloody Mary menu they're working on suggests a decent weekend brunch offering too.

The May Fair Kitchen will open late May 2014 at the May Fair Hotel, Stratton St, London W1J 8LT. Keep an eye on Hot Dinners and their Twitter feed @themayfairhotel for more information.