[SIGPLUS_EXCEPTION_SOURCE] Image source is expected to be a full URL or a path relative to the image base folder specified in the back-end but /blog/2014/coleman/gallery/ is neither a URL nor a relative path to an existing file or folder.
0
Shares 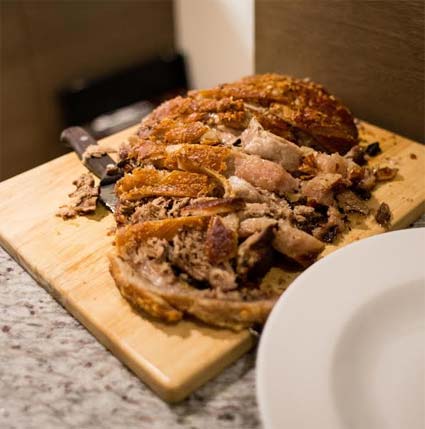 London's locally produced food and drink industry has grown at an impressive rate over the last few years as the trend towards 'locavorism' has seemingly hit its peak. Nowhere is this truer than in East London, a place which seems to be overflowing with home grown talent and retailers such as the recently opened World of Zing.

Natalie Coleman, winner of MasterChef 2013 and East End native is a prime example of such talent. Natalie has recently collaborated with East Village, the organisation behind the new Olympic legacy housing, to create a menu which celebrates the array of independent retailers in the area and aims to inspire residents to shop locally.

Natalie demonstrated her East End menu last week at an intimate dinner held in an apartment situated in the heart of East Village. Winning MasterChef is surely no easy task, and, judging by the competitiveness and skill of this year’s entrants, not something which happens by luck. Throughout the meal Natalie demonstrated her pedigree, preparing and delivering an impressive range dishes, all delivered in her laid back and charming and disarming manner for which she is famous for.

The meal started with a Gin Cured Salmon taken from famous East London salmon smokers, H Forman & Sons. The company has a long history in East London and now also have a restaurant to accompany their smokery at the edge of Olympic Park. The salmon was gin cured, a traditional method using gin from the recently launched East London Liquor Company. This distillery have recently started production and opened their doors to visitors at their distillery cum bar based in nearby Bow. This was served with lashings of crème fraîche and sour dough taken from Hackney cult bakery E5 Bakehouse.

Next up was Slow Roasted Pork - from Broadway Market butchers Hill & Szrok. Natalie coaxed this cut to result with an incredible amount of crisp crackling, served on a bed of puy lentils with a freshly salsa verde to bind it all together.

Finishing on a sweet note, Natalie served up her vanilla panna cotta topped with summer berry compote. The berries for the compote were sourced from New Spitalfields Market - a historic fruit, veg and flower wholesale market in Leyton - a short 10 minute walk from where we ate.

Natalie, who since winning MasterChef has done stages at The Hand and Flowers, St John and (now closed) Viajante has been keeping herself busy and is looking to open her own East End restaurant. Natalie is also participating in the MasterChef popup restaurant which started its 5 week run this week.

Natalie said that she designed the dishes to be easily replicated by families and flat shares that live in East Village and surrounding areas.