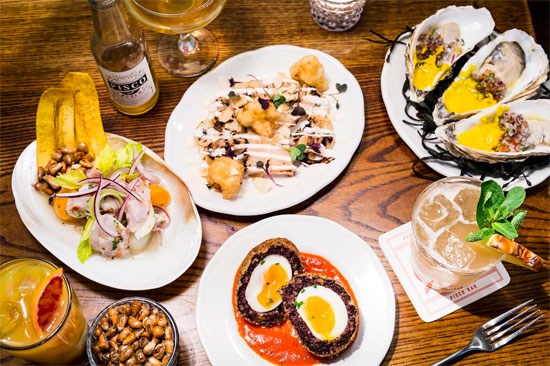 Updated 24/2 with details of the menu and opening date.

Martin Morales Peruvian takeover of London continues as he brings his second outpost of Ceviche to London (following his opening of Andina last year).

This time he's setting up shop on Old Street, just round the corner from Nightjar and the Three Crowns.

What you need to know about Ceviche Old Street

it'll be a big place with lots of history. The space is split into two, with a 70 seater dining room and a separate bar that fits a further 60. They've taken over the historic Alexandra Trust Dining Rooms and the Victorian heritage of the building means that dishes will also include Peruvian recipes from the 19th century.

The building itself was "built in 1898 by Sir Thomas Lipton, of Lipton’s Tea, the building was originally a place for East London’s working class to dine affordably and socialise with fellow workers, friends and family." Expect a restoration to make the most of the building's history and as they say - "think a Peruvian Queen Vic."

And there will be a big focus on Peruvian art. The restuarant will double as a contemporary Peruvian art gallery, showcasing the work of Peru's top contemporary artists with paintings, photography, street art and sculpture displayed around the restaurant (which you'll be able to buy too).

The menu will "introduce new Peruvian flavours into the London dining scene". Food will be served in both the bar and restaurant and, as with the original Ceviche, will have an emphasis on healthy ingredients with plenty of Amazonian and Andean superfoods on offer. There will be dishes from Peru’s Chifa (Peruvian-Chinese) and Nikkei (Peruvian-Japanese) cuisines as well as Criollo and Afro-Peruvian BBQ dishes.

The BBQ grill bar will serve anticucho skewers with a variety of meats and sauces and Peru’s popular ‘Pollo a la brasa’ – rotisserie chicken in Ceviche’s own-recipe marinade – will be available too. Salads and bar snacks using seasonal British vegetables and Peruvian superfoods such as maca, quinoa, amaranth and lucuma, previously seen at Andina, will also be available as will a takeaway menu and local delivery service.

Other dishes confirmed include:

And pisco sours, of course, The 60-cover bar will stock an impressive selection of Peruvian piscos new to Britain and a list of creative pisco cocktails (many new to Old Street) will be available alongside classics. Plus there will be British and Latin American craft beer with Peruvian beer planned later too.

Morales has got an enviable team behind him. He has lots of Peruvian-trained chefs, many of whom have worked with him from the start, and who between them have experience working at Amaz, Astrid & Gaston and Central in Peru’s capital Lima, as well as renowned London restaurants Ottolenghi, Nopi and Barrafina.

You can hear what Morales has to say about the opening here...

Ceviche Old Street opens at Baldwin Street (off City Road), Old Street, London EC1V March 30. Opening hours are Monday – Friday: 12 noon – midnight; Saturday – Sunday: 11am – midnight (11pm close on Sunday). There will be a soft launch and we'll have details of that asap. For more information, follow them on Twitter @cevicheuk.