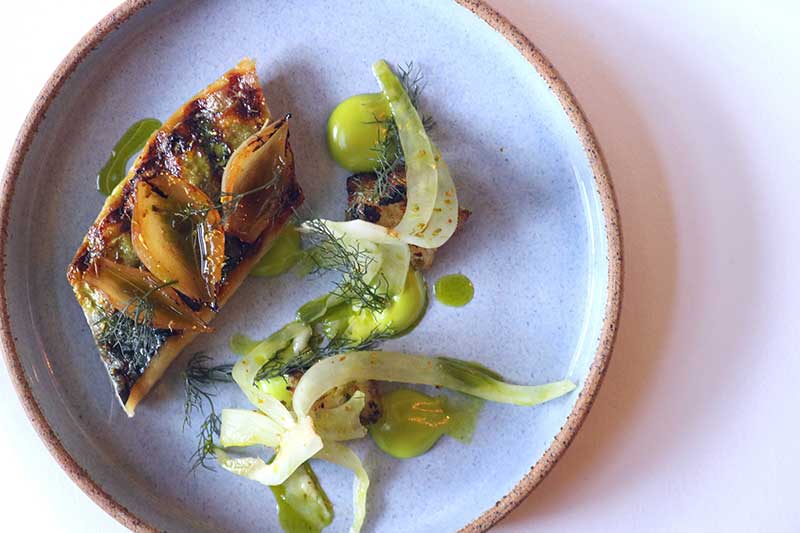 You've got to hand it to Marcus Wareing - that man does not like to stand still. His latest idea combines the introduction of a new lunch menu at his two Michelin-starred restaurant at The Berkeley Hotel in Knightsbridge with food from his own farmstead Melfort Farm.

In particular, Wareing has shifted the spotlight on to other key members of his kitchen. The new menu is supposed to showcase "the personality and talent of each of its five most senior chefs" with them creating dishes inspired by childhood memories.

So Chef Patron Shauna Froydenlund has a dish of sourdough, stracciatella, malt loaf and toast ale inspired by the bread she baked from childhood in Derry. Sous Chef Jack Bond's dish of Mackerel, smoked eel, fennel and dill (pictured) uses Jack's passion for smoking food. Eve Seemann, Junior Sous Chef has created a vegetable & herb risotto, bottarga with produce already growing at Marcus's farm and Mark Froydenlund the restaurant's other Chef Patron's dessert dish is one of Yorkshire rhubarb and Melfort Farm honey harking back to the rhubarb his family grew when he was growing up.

Marcus isn't being left out though - his dish is the centrepiece of the new menu - it's a 36-hour lamb shoulder served with greens and gratin dauphinois with lamb from the farm.

More about the new lunch menu at Marcus

Where is it? The Berkeley, Wilton Place, London SW1X 7RL

How to book: book online at www.marcusrestaurant.com/#reservations. The new lunch menu costs £55 for five courses. Available for lunch, Monday – Saturday