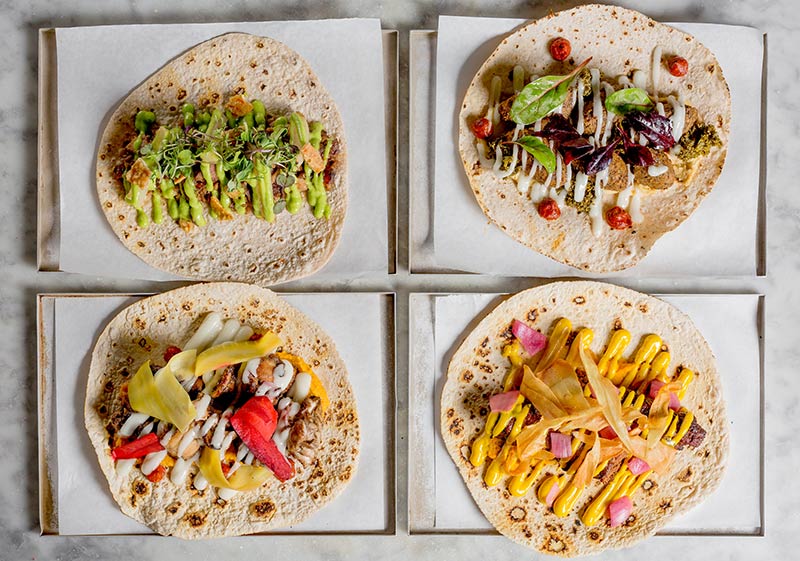 In a nutshell: Le Bab team take kebabs to the next level

Summing it all up: Featuring a hidden away chef's table for 10, the new restaurant from the team behind Le Bab promises to be quite the experience.

We've already heard about one big restaurant opening up in the new Mercer Walk development in Covent Garden. And now we know that opposite Neil Rankin's new Temper will be Maison Bab, from the folk behind Soho's Le Bab.

Over the past two years, Stephen Tozer and Ed Brunet have been serving up modern kebabs (don't, whatever you do, suggest that they're posh). Inspired by, and "paying homage to the authentic kebab houses that were the duo's original inspiration" expect kebabs like raclette shawarma, Drunken Iskender chicken shish and vegan options such as miso celeriac shish with pickled crispy onions and toum - all of which sounds great and not surprising when you consider that head chef Manu Canales Garces was formerly sous chef at Le Gavroche.

Six kebabs in total will be on the menu, rotating according to what's in season, and using meat and veg sourced from suppliers including Direct Meats and Natoora. There'll also be a selection of contemporary mezze dishes, sides and desserts.  If you're going to compare it to Le Bab, think slightly more relaxed than the Soho space - with every kebab priced under £10.

The two-floor restaurant will have room for around 40 diners and whilst it's mostly for walk-ins, you'll be able to book if your party is six people or more. Even better - if you live or work nearby - is the fact that they'll also be doing takeaway and delivery.

It all sounds lovely, but what elevates the new place from the Soho original is that here in Covent Garden, hidden away downstairs, you'll find a 10-seater chef's table restaurant, Kebab Queen, where you can watch chef Manu at work. That'll launch later in the year and will serve up a six-course kebab-centric tasting menu for £55.

Of course, it wouldn't be a proper kebab house without some booze in the mix, and here you'll find an interesting cocktail list along with fine wines by the glass and London craft beer.

“Maison Bab will be completely different to our first restaurant, Le Bab." says Tozer. "For us, it's about celebrating all that 'kebab' offers and showcasing its diversity as a dish, whilst absolutely respecting its traditions. But we want to introduce something truly unique, interesting and impactful to the London restaurant scene."

Where is it? Mercers Walk, Covent Garden

How to book: Book online at www.eatlebab.com