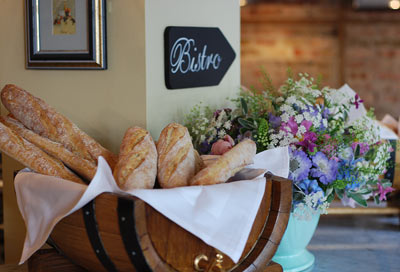 Often all eyes are on central London openings, but very interesting things are opening further away from the centre. Just opened (last week) in Kensal Rise is new French bistro Madame Gautier - an addition to the existing Bar a Vin and Traiteur.

It's run by chef Mark Gautier (who has previously trained chefs professionally including the chefs at Jamie Oliver's Fifteen and mentoring the 2004 'Young Chef of the Year) and his wife Corinne. They're putting on a traditional French fare from seasonal ingredients from local farms. The revamped room is split in two by the bar - with the bistro on one side now seating 70 and the "bar a vin" on the other.

Dishes kicking everything off included:

Madame Gautier Bistro, Bar a Vin and Traiteur is at 64-66 Chamberlayne Road, Kensal Rise, London NW10 3JJ. Find out more by following them on Twitter. And if you've been - tell us on the comments below.