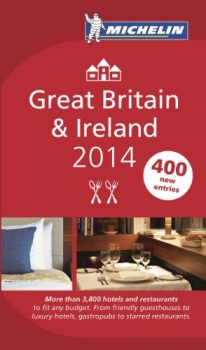 So it's that time of the year again - when chefs the length and breadth of Great Britain and Ireland find out whether all their hard work over the past year has paid off and resulted in a star or more from the Michelin inspectors.

Twitter went pretty crazy this morning as chefs and restaurants reacted to the news. Ametsa declared themselves "thrilled" and "delighted" by their star. "It's a special day," tweeted Story's Tom Sellers. "Dreams do come true." "Those 104 train journeys have been worth it!" said Nathan Outlaw, "Not like I'm counting..."

Ashley Palmer Watts, head chef at Dinner by Heston was clearly pleased by the news. “Wow. This is just incredible news and an amazing achievement for the entire team at Dinner by Heston Blumenthal," he told Hot Dinners. "Everyone works so hard every day and myself and Heston are so proud of each and every one of them. I am just blown away.” Equally happy was Eric Chavot of Brasserie Chavot who told us: "I’ve been in this game for a long time and really appreciate what Michelin means to restaurants. I wasn’t expecting a star for Brasserie Chavot at all – so it’s a great surprise and thrill for the staff. No matter what chefs or restaurateurs say, Michelin is the Holy Grail of achievement and I am delighted today."

Gabriel Gonzalez, who is one of the co-owners of Lima said: “A Michelin star is an exceptional accomplishment. I am so proud of Robert Ortiz and the team who work to exceptional standards at every service, and feel this really is a testament to all of our hard work over the years. I feel truly honoured that we are also the first Peruvian restaurant to gain a star in the UK and Europe.” "We are so incredibly happy and proud," said Social Eating House's Paul Hood.

As with everything, some restaurants are celebrating today while others have found out that they've lost a star. London restaurants which lost a Michelin star include Petersham Nurseries which lost its only star and L'atelier de Joel Robuchon which dropped from two stars to one star.

Of course it's not all about changes - there are lots of London restaurants who have quietly (but very happily) retained their stars including Restaurant Gordon Ramsay. "Great job," tweeted Ramsay this morning to his team, praising them for "being the longest running 3 Michelin starred restaurant in London. What an achievement!"

Last night the UK Michelin office also released the full list of 2014 Bib Gourmands. Bibs are given to places 'offering good food at moderate prices'. In London 'moderate' translates to three courses for £28 or less - so that's a pretty good deal for great food. This is also where Michelin gets the chance to reward more restaurants that aren't in the starched white tablecloth brigade.

This year eight new restaurants in London have been awarded Bib Gourmands, three less than last year. They are as follows:

And does it all really matter? Well the bald truth is yes. In the Hot Dinners 2013 Reader Survey 68% of readers told us they were more likely to choose to eat at a restaurant which had one or more Michelin stars.

For the full list of London restaurants with Michelin stars for 2014 - read our full guide. And to see what the newly-starred chefs had to say about their gains in the 2014 Guide in our chefs' reactions piece.