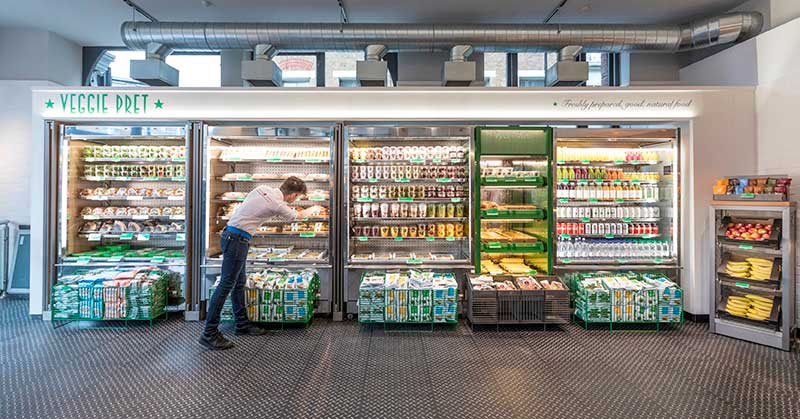 In a nutshell: Pret's vegan and veggie rollout continues

Summing it all up: The third Veggie Pret to open will be on Exmouth Market and will be the chain's first brand new veggie store rather than a conversion of an existing one

At some point, when they become ubiquitous, I'm sure we'll stop reporting on the opening of yet another Veggie Pret, but right now the chain's in early rollout, so news that a third one is opening in London is still big. Exmouth Market is the choice of location and this branch is different in that it's not a conversion to the green side of an existing Pret but a brand new store opening.

The news, which is sure to please plenty of North Londoners, did have some negative reaction. On Pret's Facebook page it was mainly from those who are annoyed there's not one hitting their part of town (or the UK). "You are aware there is more London south of the river, right?" said Nix Czujko.

Another group worried what this meant for Exmouth Market's more indie blend of restaurants. "Could this be the end of Exmouth Market as we know it?" asked Jeni Wiliams on Facebook. "I fear for the independent traders and the food stall holders." And another detractor on Twitter said; "So glad you'll be gentrifying Exmouth market further and taking business away from small businesses struggling with extortionate rent."

That said, we're pretty sure that this chap speaks for the masses when he tweeted:

The new Pret opening coincides with the launch of their Autumn and Winter range of veggie and vegan dishes which include:

When does it open? 11 October 2017. They're going to have a sneak opening on 10 October - there'll be details of that on Pret's socical channels from 5th October.