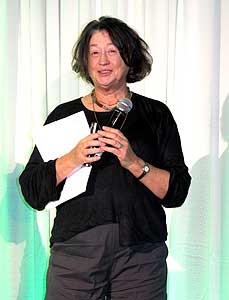 To Shoreditch last night for the inaugural London Restaurant Festival Awards where the great and the good of London’s restaurant scene – and Hot Dinners – gathered to celebrate the best of the bunch. Fay Maschler had promised us awards which  would ‘reward attributes like bravery, passion, discovery, ceremony, wit and warmth.’ Among the guests there we spotted critics Giles Coren and Tracy Macleod, the Evening Standard’s Charles Campion, Tom Parker Bowles as well as a clutch of chefs.

Fay and fellow festival organiser Simon Davis both professed to be exhausted  by the week’s activities. ‘I’ve put on half a stone,’ Simon told us. Clearly the event had been a success as he added, 'we don't have the final figures yet, but we think we had almost 10,000 people eating festival menus.'

Both were clearly committed to next year’s festival with Simon already having an idea for a few more key events, details of most of which he was keeping close to his chest. But he would admit to one idea, which was coming up with a single cost for a festival menu - 'I've been talking to Fay earlier,' he said, 'and we're thinking of making it £20.10 in 2010.'

As for the date of next year's festival, ‘It may not be at exactly this time of year,’ Fay admitted, ‘there’s a lot on at the moment with the Restaurant Show and Frieze Art,’ but she agreed all the converging events meant London had really buzzed over the last week.

As for the awards themselves, after so many Best Restaurant gongs being given out in other ceremonies, it was refreshing to have categories such as Fun and Passion instead. All credit to Launceston Place chef Tristan Welch who was the only one of the winners to grab the microphone and ensure that equal praise was given to his restaurant manager, Hadi Aknin. The final award of the night was a surprise category, with Fay being called on stage to collect The Champagne G H Mumm award for outstanding contribution to London restaurants, which she looked tickled pink to receive.

Once the awards had been handed out with much whooping and cheering, the winners headed off to next door’s Pizza East where host Nick Jones was hosting his second party in two days. We took the opportunity to ask Jones how work was progressing on his next project the Dean Street Townhouse. ‘You’re very well informed,’ he noted, before telling us that the Dean Street building was a simply gorgeous Georgian house which decor-wise was being taken back to original state. The brasserie would be open all day from 7 in the morning and food-wise was inspired by similar establishments in New York’s Soho.

Bravery – given for a person or company celebrating taking a bold step – breaking new ground – doing something new and different.
Winner: Wapping Food

Warmth and welcome – a good attitude, no snootiness and hospitable
Winner: Angelus

One person’s passion - a driving force, with no understanding of compromise who stays involved with an enthusiasm that never flags.
Winner: Mourad Mazouz 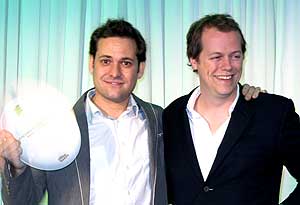 Fun - when chefs and waiters enjoy their job and that feeling is transmitted to the customers, a meal out is life-enhancing. Food sometimes runs the risk of being taken too seriously.
Winner: Portobello Pizzeria

There were also a number of awards voted for by Top Table users for the best Festival menus which were as follows: