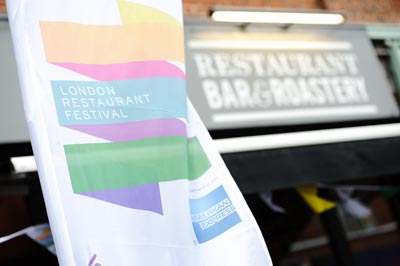 While there has been some controversy at the start of this year's event (Fay Maschler and the Evening Standard will be creating a rival event next year) there's an impressive line-up for this year's London Restaurant Festival. Big new names include the festival chair Gizzi Erskine and Jonathan Ross - yes, that's right, Wossy himself - who'll be hosting a one-off film night at BAFTA 195 Piccadilly.

The festival will be longer than ever this year, involving some 350 restaurants, and running between 4th and 21st October. Most of the events will be based around a concept that has already proved popular in previous years: restaurant hopping. The organisers say it will allow people to try a range of different places: some new, some familiar, some they might not have heard of.

There will be events to cater for all sorts of budgets. At the cheaper end, every weekday you can take part in Graze, each based around particular areas in London. A 'passport' buys you a free drink at all of the 12 featured restaurants in each location: Central, North and City. Once there, you can buy a small plate dish, likely to cost between £4 and £6, from a special festival menu. And you can use the ticket at any point in the fortnight, so you don't have to try cramming them all in on the same night.

If you want to stick to a particular cuisine, then that's catered for too, with weekend tours devoted to tapas, Japanese food and Italian cicchetti.

At the more expensive end of the hopping theme are the Gourmet Odysseys, with the usual Routemaster bus to whisk you around and Laurent Perrier champagne to kick things off. The Discovery one will take you on a journey around new restaurants including one which hasn't even opened yet. And there's another tour based entirely in the Shard, from Aqua to Hutong to an afternoon tea dessert course.

As for Jonathan Ross, he won't be cooking anything himself, he'll be hosting this year's Eat Film event at BAFTA 195 Piccadilly. There'll be space for 220 people to sit back and watch his chosen movie - Spirited Away, followed by a three course meal inspired by the Japanese animated film.

There's more to the London Restaurant Festival than the fortnight's events: this is about celebrating the city's dining scene and encouraging people to eat out. Alongside the official programme of events, a huge range of places, from the latest openings to the most exclusive dining rooms, will be offering special menus costing between £10 and £50, to spread the experience to as many people as possible.

Gizzi Erskine said she was delighted to be involved: "This is a festival that continues to thrill Londoners with gastronomic delights, creating unforgettable events", she said. In essence, it's a chance to try somewhere new, to share meals with friends, and to take in the very best the capital has to offer.

London Restaurant Festival 2013 runs from 4th to 21st October. Tickets will be on general sale from 17th August from the festival website.