Le Swine are setting up permanently on Lamb Street in Spitalfields 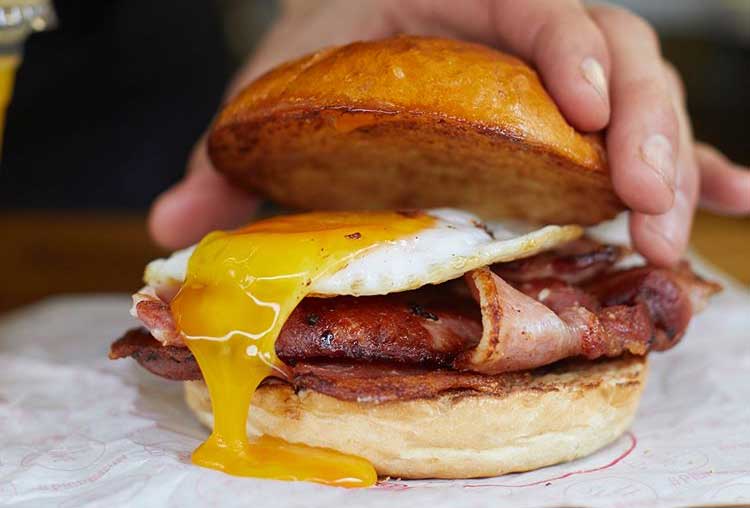 Summing it all up: City breakfasts just got a whole load more fun with the arrival of Le Swine in Spitalfields - the first permanent spot for the popular bacon buttie street food traders.

We've been writing about Le Swine ever since they first started trading four years ago. Their USP? Well, it certainly helped having top chef Bruno Loubet as a backer. That was who Le Swine chef and founder James Packman was working with, when he came up with the idea of selling the perfect bacon sandwich to Londoners.

Since then they've built up a loyal following of fans of their amazing bacon rolls and Swine burger (bacon, gammon patty) and Duck Egg baps and, most recently, have set up their van at Bishops Square in Spitalfields every Thursday and Friday. But now they've decided to make the whole Spitalfields arrangement a permanent one.

"Up till now every summer we've hit the festival circuit hard," James told us, "which has meant we only dip in and out of London during the summer months. But this opportunity came up which is great."

They'll be opening in one of those permanently parked containers on Lamb Street after the bank holiday weekend. The new place will serve up both breakfast and lunch - and they're planning some new dishes for the lunch crowd, including BLTs and a bacon cheeseburger, as well as some new sides and homemade dips.

Best of all, if you pop down for lunch on their opening day, they're giving away 250 free bacon sarnies.