[SIGPLUS_EXCEPTION_SOURCE] Image source is expected to be a full URL or a path relative to the image base folder specified in the back-end but /blog/2014/latinamerica/gallery is neither a URL nor a relative path to an existing file or folder.
0
Shares 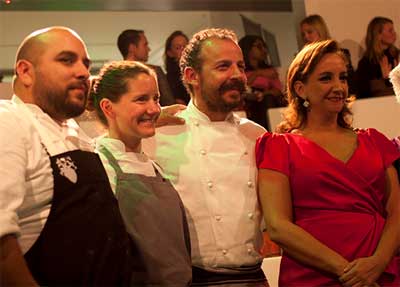 Latin America’s 50 Best Restaurants 2015 is celebrating a new partnership with Mexico, which will play host to the awards ceremony next year.

To celebrate the announcement, some of Mexico’s best chefs and the country's Minister for Tourism came together at the Natural History Museum last week in an event to “showcase the incredible gastronomic strength of the region”, where guests sampled a selection of Latin American bites and boozy concoctions.

Drinks were packed with traditional Mexican flavours, like the hibiscus, kumquat and tequila cocktail, or the simple but punchy lime and mezcal cocktail.

We also tried canapés from each chef, offering traditional Mexican fare with a modern twist, like the persimmon canapé with crushed pistachios and soft cheese. Meaty abalone was served on Mexican bread with an avocado purée, while a tuna ceviche was wonderfully sharp and astringent. Sweet treats included tres leches bonbons, vividly colourful Mexican sugar confectionery, and café del olla, or literally, coffee from the lake, reinterpreted as a crunchy, cinnamon-based dessert.

Chef Elena Reygadas, who is behind Rosetta in Mexico City, provided the most eyebrow raising dish – a deep fried kale canapé, completed with a crispy agave worm on top. The kale was coated in another type of blended worm, and cooked with vinegar extracted from ants. (And yes, we did try it!)