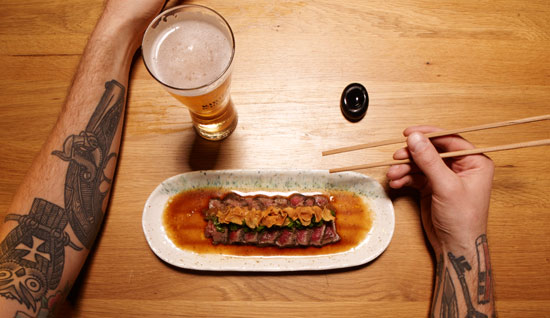 When Scott Hallsworth's extremely popular Kurobuta first started out, it was as a pop-up on the King's Road (while they got the permanent venue underway). That pop-up was so popular that it just kept going, but now it's grown out of its original location and moved a few doors down to a much bigger premises.

The new Chelsea Kurobuta will be bigger, seating up to 90 with a lounge, bar, private dining, events areas and - we like the sound of this - a beer keg table for Frosted Tankard Beers. It's not all beer though, with Slushy Cocktails, Japanese Whiskies, Barrel-aged Cocktails, Growlers and sparkling Sake on the menu too.

As for food, you can expect familiar favourites - from Junk Food Japan’s Sashimi Pizza to Robata BBQ dishes and there will also be more sashimi and sushi on offer at the new location.

And the original location isn't going away either, as that will host Hallsworth's new venture. You can read more about Joe's Oriental Diner here.

The new Kurobuta Chelsea opens on 30 January at 312 King's Road, London SW3 5UH. For more on Kurobuta, follow them @KurobutaLondon