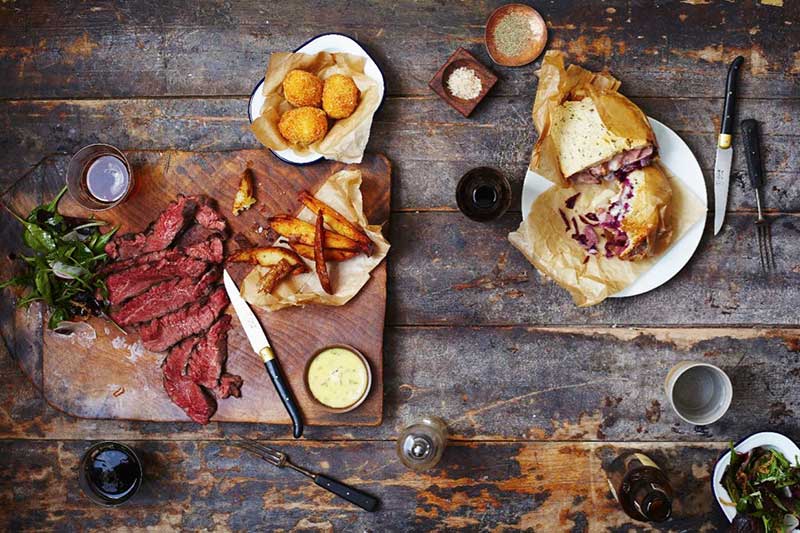 In a nutshell: Kentish Town steakhouse sets up shop in Shoreditch

Summing it all up: Popular neighbourhood steakhouse Beef & Brew are expanding - taking their well-priced steaks and wide range of beers to Haggerston.

We've long been fans of the Kentish Town steakhouse Beef & Brew, so hearing that they're about to open a new restaurant in Haggerston is nothing but good news. They're taking on the site previously occupied by Brew & Que, so anyone who was a fan of that can still head there for meat and beer.

Unlike their North London site, the Haggerston spot gives the team the opportunity to bring in an extended menu with beer snacks and more, so expect to kick off your meal with a half pint of fried oysters with a yuzu dressing or maybe brisket on toast with pickles and gravy.

But of course the real focus here is on the steak and - as we can attest - it's really good. Lots of that is due, of course, to sourcing, so there's sirloin from retired dairy cows from Txuleta in Galicia; fillet from Swaledale Foods’ native-breed cattle in North Yorkshire and onglet from grass-fed Herefords. But the way they cook also makes a difference - dipping each steak in beef dripping before chargrilling.

Sides include carrots, dill and buttermilk dressing, smoked aubergine with honey and miso and sweet potato with coconut yogurt and spices. And they'll also be doing cracking Sunday roasts too.

If you're after a bargain, head here on weekdays when between 6-7pm, hanger steak and chips is on the menu for just £10.

As the name suggests, there's plenty of thought given to liquid refreshment too. Draught lagers will include Sorachi from Scottish brewery Harviestoun, Siren’s Calypso and Hook Island Red ale from Five Points. There'll be specialist beer flights and you can get beer pairing with your meal along with wines on tap and a small wine list. while wines will also be poured on tap, with a concise bottle list focusing on small producers.

Co-founder Dan promises "to bring quality steaks that don’t break the bank to an even wider audience in East London - we’re moving into a beautiful old pub, where we can welcome locals for everything from a beer and a bar snack to a lazy Sunday roast, and continue to champion amazing small producers.”