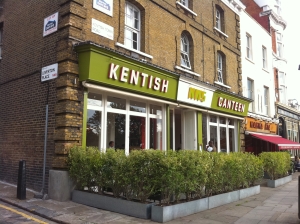 Residents of Kentish Town rejoice! The opening of new restaurant Kentish Canteen on the Kentish Town Road looks set to kickstart eating out in this area.

Owner Wendy Sinclair and her husband have been in the food business for over 20 years and also run PJs Bar and Grill in Covent Garden. They found this spot, just by Kentish Town tube station through their designer whose studio is just around the corner. 'We love the fact you've got a grungy high street and yet very sophisticated houses behind us,' she told Hot Dinners. 'It had just the right vibe.'

Wendy has also run an events company for the past 15 years but wanted to open somewhere with her own take on food. 'Because PJs is tourist-land I could never get my hands on the menu there,' she explains.  'We're going to be a great place to pop in for a quick meal and a glass of wine - offering the best prices we could with the highest quality ingredients. We want to be a restaurant where 80% of the dishes are under £10 - so this will be a place with a fairly fast turnover, but not fast food. We're not wholly organic - although our salmon is, our meat is particularly well-hung and our chicken and eggs are free-range.'

Dishes on the menus we saw included Ricotta and pinenut dumplings wrapped in charred aubergine with sage butter, sardines on sourdough toast with roast tomatoes and capers and rare grilled fillet of beef marinated in ginger, shallots and soy. The weekend brunch looked particularly tasty, with Jimmy's sausage and bubble and squeak as well as Panzanella and pancakes on offer. 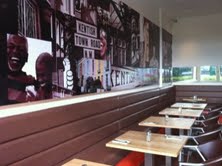 Kentish Canteen's kitchen is well staffed - Head chef John Cook was previously at Vinoteca and he's being supported by Clare Mitchell who was Head Chef at Acorn House and who's also been doing stints at Jo Wood's Mrs Paisley's Lashings pop-up.

Keeping with the current restaurant vogue of sourcing produce locally, the restaurant will be smoking their own organic salmon on the premises. A local preserve-maker is coming up with jam, homemade nutella and peanut butter and there'll be a draught lager from Camden Lager microbrewery on tap at the end of the month. The wine list was put together by a friend of Wendy's who's a master of wine with his own vineyard in the South of France.
0
Shares