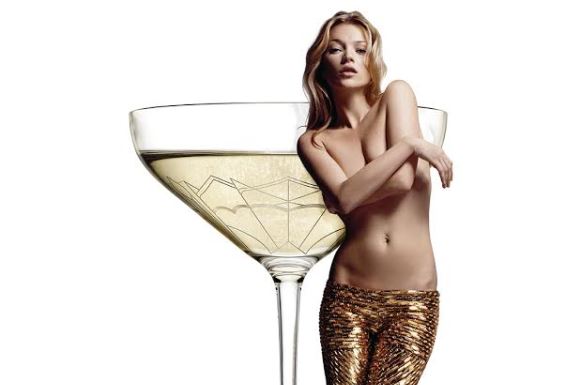 Why is there a picture of a half naked Kate Moss on Hot Dinners you might be asking yourself? Have I clicked on the Daily Mail's sidebar of shame by mistake? No, the reason is that Ms Moss - well actually her breast to be specific - has been the inspiration for a new glass being introduced at Mayfair restaurant 34.

The coupe in question was moulded to the model's breast to celebrate her 40th birthday. And the idea to do it wasn't entirely random - apparently legend has it that the first ‘Bol Sein’ (as the coupe glass used to be called) was shaped around Marie Antoinette’s left breast.

Kate's glass will be launched in October - so anyone ordering champagne from 34 or another of the restaurant's sister establishments - The Ivy, Daphne’s, Scott’s and The Club at The Ivy will be able to drink from the 34 Kate Moss Coupe.