[SIGPLUS_EXCEPTION_SOURCE] Image source is expected to be a full URL or a path relative to the image base folder specified in the back-end but /blog/2013/kaspars/gallery is neither a URL nor a relative path to an existing file or folder.
0
Shares

Kaspar's Seafood Bar and Grill to open in The Savoy 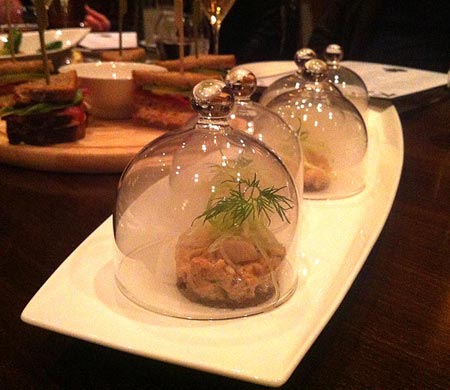 As we wait to find out who's going to take over from Gordon Ramsay at Claridges, across town another top-flight hotel has quietly put its dining room under wraps for a major revamp.

The Savoy has closed its River Room restaurant which will reopen on 2 May as Kaspar's Seafood and Grill. The name is a nod to the carved wooden cat that sits at dinners in the hotel where just 13 guests are present.

The room is being given a completely new design by Robert Angell - who worked on Lime Wood and The Wolseley when Creative Director at David Collins. Most of the carpets are being taken up and replaced with marble floors. There'll be a central fish bar with counter dining for walk-ins, banquette seating, 110 covers and a semi-private Captain's table seating 10-12 people.

Kaspar's chef, Canadian-born James Pare, was responsible for the River restaurant, but instead of recreating dishes from classic Savoy menus as he did before, he'll be serving up an informal menu where seafood is the main draw. So there'll be poached Isle of Skye lobster with fries and monkfish kebabs as well as steak tartare and smoked salmon sausages with apple sauerkraut. That said, the classic Peach Melba which was invented at The Savoy 120 years ago, will remain on the dessert menu.

Hot Dinners went to an early tasting session this week to work our way through some of the menu, and particularly enjoyed the £25 lobster club sandwich  (well, who wouldn't), oysters (£21 for a half dozen) and platter of smoked fish including Forman's London Cure and hot smoked sable fish with paprika (two for £14). The most dramatic dish by far was the shrimp and eel cocktail which came in its own smoke-filled cloche.

As for whether The Savoy will succeed in being one of the few London hotels who don't need a big name chef in their main restaurant to turn it into a destination dining spot, well we'll have to wait and see.

Kaspar's opens at The Savoy, Strand, London WC2R 0EU on 2 May 2013. You can follow them @kasparslondon