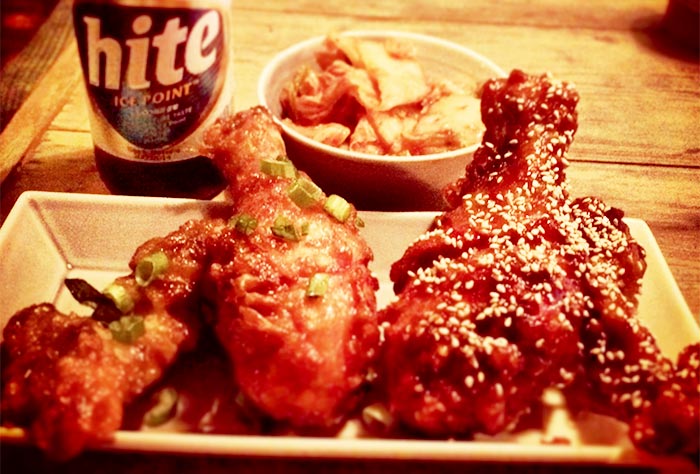 Following the pop-up on Rivington Street, Korean chicken specialists Jubo are one in a list of many changes coming to Exmouth Market.

The main focus is the Korean chicken. So that's the crunchy chicken wings and boneless strips which are served in small plates or large platters, and glazed in Soy Garlic, Hot or Volcanic sauces. Alongside those, expect similar dishes to the original which include slow cooked pork or bulgogi chicken buns, BBQ beef and pluma plus more dishes like the Yaka Mein (sliced skirt, beef marrow broth, buckwheat noodles, shaved cucumber, kochukaru, crispy shallots, sesame and boiled egg).

And expect more Anju (drinking food) at the new Jubo - these will be new snacks and pickles to wash down with beer (Asahi super dry lager on tap).

And soju, of course. Cocktails, bottles and shooters of the Korean drink will be on hand.

Jubo Exmouth Market opens on 5 June 2015 at 50 Exmouth Market, London, EC1R 4QE. For more from them, follow them on Twitter @jubolondon