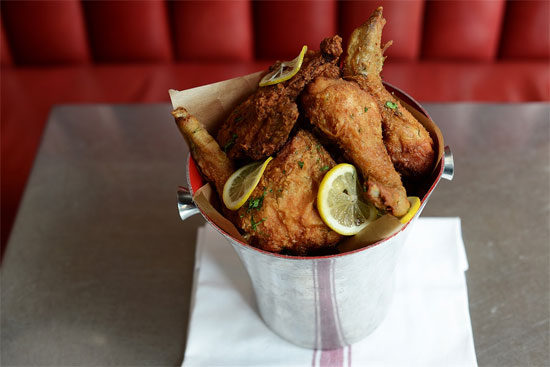 Kentish Town readers of Hot Dinners may have spotted that the Kentish Canteen is no more and that work is underway transforming it into Joe’s Southern Kitchen & Bar.

This is going to be the second site for the restaurant which already has a spot in Covent Garden. As their Operations Manager sees it, the move to Kentish Town made total sense. "The restaurant scene in NW5 is about to explode and we want to be a part of it.”

This new Joe’s will feature a 90 cover ground floor restaurant with room for 20 diners outside. Downstairs, which used to be the Shebeen will be a new basement bar called Jailbird. The name derives from the building's former incarnation as a police station. Former cells are being done up into drinking booths. The cocktail list, as you might imagine of anywhere with an American theme includes Juleps and Sazerac and a large selection of Bourbons and Ryes.

In the kitchen will be newly-appointed Executive Chef Trevor Tobin who comes here via Steam & Rye, The Big Easy and Goodman) along with Head Chef and creator of the original Joe’s menu, Mark Jeevaratnam. And while the menu at Joe’s Kentish Town will feature many of the favourites from the original venue like Devilled Eggs, Mac 'n' Cheese and Gooey Corn Spoon Bread, they'll be focusing attention on a new recipe, Sweet Tea Brined Fried Chicken with Lemon Salt & Tabasco Honey.

Another difference in Kentish Town will be the opening hours - for the first time they'll be open for breakfast and brunch.

Joe's Southern Kitchen & Bar opens 13 April 2015 300 Kentish Town Road, London, NW5 2TG. Opening hours are Monday to Friday 8am to Midnight – Saturday and Sunday 9am to Midnight. They'll be running a soft launch offer of 50% off food from 6-12 April 2015. Keep up with their news on Twitter @friedchickenLDN or on Facebook.