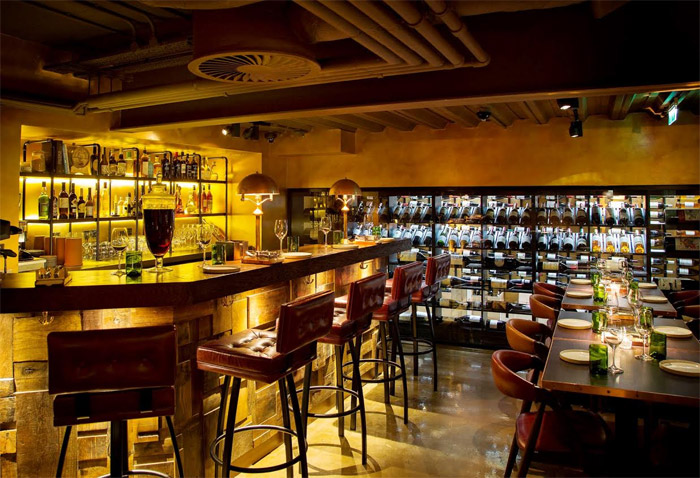 3/6 updated with pics of the interior

You'll have spotted from our Coming Soon page that Jason Atherton is opening two new restaurants in London in 2015. And now we've got full details of what to expect from the first of them, Social Wine and Tapas. Essentially it's a place where the sommelier takes centre stage. We rather like the idea of it and it brings to mind Aldo Sohm in New York (in a very good way).

Leading the team will be Laure Patry (pictured) who is Executive Group Head Sommelier for the Social restaurants and has worked with Jason Atherton for 10 years (we've personally benefited from her recommendations at several of the Social openings). She's currently pulling together a list of accessible wines from around the world, while championing small growers. They'll also be making fine wines available to all by using the Coravin system, allowing them to be available by the glass.

And emphasising the necessary knowledge of wine, we like the idea that all the front of house serving staff are going to be sommeliers, so they'll be able to offer the necessary expertise when you're working out what to order.

As for the food, Atherton's brought in head chef Frankie Van Loo (from Social Eating House) to create a menu of modern tapas style dishes, made with the best of British produce. They'll also have a seasonally changing selection of cheeses and charcuterie from the basement kitchen counter. A brief list of the dishes they're starting with (pictured below) includes:

They've brought in Russell Sage Studios (Social Eating House, Grain Store, Dishoom) for the design and he will be (according to the release) creating "an urban and contemporary interior with metallic finishes throughout. The walls will be adorned with copper artwork and an industrial chandelier will be a focal point at the entrance to Social Wine & Tapas." We like the sound of the basemet space where the lighting "will create a glimmering room by night, with bespoke wall lights made from an original 1920s theatre chandelier."

All this and a wine shop with somelliers and tastings too (with events planned for the future).