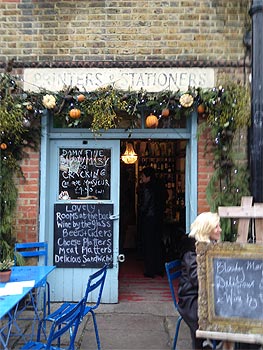 His food blog came highly commended in this year's Observer Food Monthly Awards and after a busy few months writing a new book and getting married, James Ramsden and his now-wife (but long-time co-conspirator) Rosie are bringing back their hugely popular supperclub The Secret Larder.

They'll be moving from Holloway Road and taking over Printers and Stationers, a wine shop and bar just off Columbia Road which James describes as "cosier than a phoenix feather muff, and more chic than, I dunno, Audrey Tautou". With seats damned hard to come by when they were last up and running, the couple have also decided to move it from fortnightly to weekly.

If you haven't been before - and to be fair the Sunday Times said it was 'harder to get in than The Ivy' - you should know that they take just 20 guests and supper comprises four courses plus welcome cocktail, coffee and homemade truffles at a quite frankly crazily low suggested donation of £30-a-head. And of course the handy thing about relocating to a wine store is that owner Augustin has agreed to waive the usual £9 on-premises corkage fee if you want to bring your own - and provide a specially paired house wine by the glass if you'd prefer.

Hot Dinners got the skinny on the first two dates of the new-look Larder which are 31st January and 7th February. To book email James. Bookings are open until midday on Monday 14th January, when all entries will be drawn from a hat. Winners will be informed in due course. Join their facebook group here and for more information follow @jteramsden on Twitter.