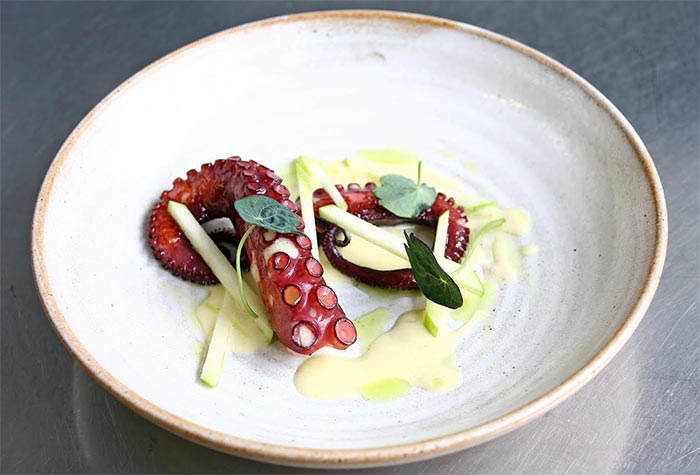 Until last Summer, James Ramsden and Sam Herlihy ran a supper club called The Secret Larder. But now they're heading over to Hackney to open a restaurant called Pidgin. We caught up with James to find out more.

Why are you making the move to a restaurant now?

We felt the time had come to move on from the supper club and do something a bit more permanent. Fun as it was feeding people in the back of a coffee shop once a week, this just felt like the right thing to progress to. It's an incredibly exciting time for restaurants in London and we wanted to be a part of that in our own small way.

That said, we are under no illusions about our cooking abilities and while I reckon as a supper club our offering was pretty damn fine, neither Sam nor I are chefs. So we've signed up one of the city's most exciting and promising young chefs to head up our kitchen team. At this point we can't disclose their name, but they've cooked in some of the more interesting kitchens in the country. We're on the look-out for a full-time restaurant manager but for now have Emily Untalan-Lee, ex St. John and Koya, whipping our front of house into shape.

And what can you tell us about the menu?

The menu, or rather the menus, are something we're having a great time developing. Because we wanted to retain some link to the supper club, we're sticking with the idea of a set, four-course menu that will change every week. To pin it down to a cuisine we'd call it modern British, which is intentionally vague and broad in its scope, though it goes without saying that ingredients will be carefully and judiciously sourced. Here's the opening menu (for £35):

Menus won't be 'themed' as such but will all hang together, week-on-week, with a small and weekly changing predominantly old world wine list to match of three whites and three reds. There'll be one beer on draught, and a frequently changing and equally concise cocktail list. And you can have any coffee you want as long as it's espresso. It's all about brevity, focus, and variety.

And when are you due to open?

We'll be opening July 7 for dinner Tuesday to Sunday, and lunch Saturday and Sunday. The restaurant is cosy and intimate - we'll be doing about 30 covers, with room for four more at the bar and a couple outside on a fine evening. Design will be done in house.

Update: James has just announced (via Code London) that the chef for Pidgin will be Elizabeth Allen who most recently headed up the kitchens at The Smokehouse in Islington, "a great honour to have her on board," he tweeted. The drinks list is also now up on their website. We love the sound of their regularly changing drinks list - including the London Fields - vodka, sorrel and lime blossom syrup with celery bitters and rosemary (£6) or, for abstainers, the PT No G with Pidgin tonic, elderflower, cucumber and mint (£3).

Pidgin opens in Hackney on July 7 2015 at 52 Wilton Way, London E8 (that's where Mayfields used to be) and you can book online now. For the latest information, follow them on Twitter @pidginlondon