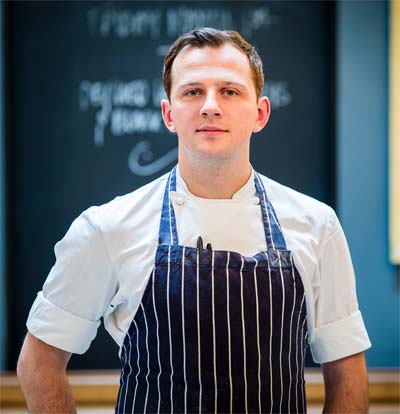 James Lowe is a chef we've been following ever since a first, hugely impressive dinner back in the mists of time at the Loft Project when he was one third of the ground-breaking trio The Young Turks along with Isaac McHale (Clove Club) and Ben Greeno (Momofuku Seiobo). Since then he's had success at Upstairs at... and now at long last he's getting ready to open his own restaurant, Lyle's, in Shoreditch.

Lowe has gathered together a new dream team to bring his long wished-for restaurant to life. His co-owners include Jyo, Karam & Sunaina Sethi, the family behind Trishna, Gymkhana, Bubbledogs & Kitchen Table and John Ogier, who you may have spotted in charge of front of house at Gymkhana after it opened).

The new restaurant, which takes its name from James's mother's maiden name, will be opening in a space once taken up by a gallery, on the ground floor of the Tea Building in Shoreditch. That's the one that also houses Pizza East and Shoreditch House on the roof. Seating 50 and with an open kitchen, it'll be an all-day restaurant, starting with breakfast coffee and onsite-baked goods.

They're also paying as much attention to their coffee as their wine list, and they're hoping it will be a reason alone to pop into Lyle's if you're passing. Design-wise, it "will be very simple; polished concrete, painted brick and reclaimed wood, quite utilitarian. We want an un-intimidating space where people will feel comfortable, with the staff and guests providing the colour and warmth, " James told us.

As for the food, the menu is still being finalised but James is already curing some sea urchin roe for the opening and some lamb leg for lamb prosciutto later in the year. They'll be open all day Monday to Friday and for dinner only on Saturday. For lunch, there will be a list of around 12 dishes ranging from £7- £15 while dinner will be a set menu at £39 and will "change and evolve daily" - a set-up that will be familiar (and very welcome) if you've been to Upstairs at... or any of James's residencies and pop-ups.

We caught up with James to be the first to bring you the full story:

How did the new restaurant come about?

John and I met at St John Bread & Wine, way back in 2006. John took over as manager at roughly the same time I became head chef. We worked together for three years and formed a strong friendship and great working relationship. About eighteen months ago we met up and decided to work together again to get a restaurant open, which we have finally managed to do, with the help of Jyo, Karam and Sunaina. It's taken us far longer than I expected but to finally find such a great site in east London, where I've been cooking and working for the last eight years, is amazing.

What can you tell us about the food?

The food will be British, simple and driven by a common sense kind of mentality. I love how in other professions you are expected to justify the decisions you make, and I really try and keep that in mind when cooking. I know it doesn't sound very rock 'n roll, but I don't care, the food will be good, which is way more important.

We'll be buying from the network of farmers and suppliers I’ve built up over the past eight years, putting a lot of effort into getting the best ingredients and then treating them with the respect they deserve. I’m most excited about getting back to some basic cookery using the wood burning oven and charcoal grill I am currently in the process of designing.

We’re baking bread and a few other items on-site which will be available in the morning, along with rotating house coffee by people like Belleville from Paris and Koppi from Sweden.

And finally - what can you tell us about the drinks?

The wine list will be small collection of wines that change regularly, and by drawing on a large number of importers, we can create something that adapts to the changing menus and seasons.

Since this piece first went up - some menu details have been revealed, including:

Lunch will be a list of 12 dishes ranging from £7 to £15, while dinner will be a set menu at £39 that will change daily. There will also be a daily offering of items made in-house including bread, charcuterie, butter, preserves and pickles.