Is this Tripadvisor's most prolific restaurant reviewer? 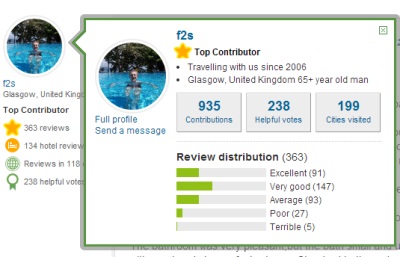 He thinks Gordon Ramsay's Royal Hospital Road is 'friendly with superb food' but dismisses Dinner by Heston as 'very tedious'. Peter Macaulay may not be a critic you've heard of, but the Glasgow-based retired oil rig medic is apparently TripAdvisor's most prolific restaurant reviewer.

According to Glasgow newspaper The Herald Macaulay, 65, has written 363 reviews (including 197 restaurant reviews) for the website based on the places he stayed whilst travelling the world for his job.

Our favourite of Macaulay's reviews include:

We particularly love his comment on his meal at Ramsay's restaurant to the Herald: "believe it or not, even although the manager was French, it was an amazingly good experience".

If you want to look him up and enjoy his reviews in full - you can see Macaulay's reviewer profile here.