[SIGPLUS_EXCEPTION_SOURCE] Image source is expected to be a full URL or a path relative to the image base folder specified in the back-end but /blog/2012/in-n-out/gallery is neither a URL nor a relative path to an existing file or folder.
0
Shares 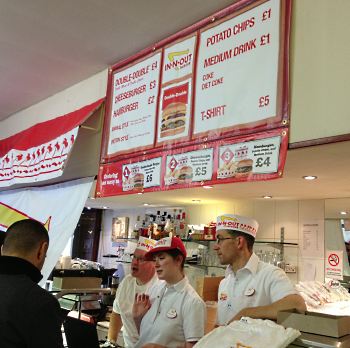 The North Circular and Santa Monica Boulevard have a lot in common. They're both streets. Well, that's it really but for four hours today a side street off the distinctly unlovely carriageway that ploughs through unremarkable Hendon took on a distinct Californian feel.

In-N-Out burger, who had been rumoured numerous times to set up shop in London, finally did so, and it the most odd fashion imaginable. They rented the Florence Cafe, an Italian caff in NW4, for one lunch service on a Tuesday and announced it a day before with a garish and amateurish looking ad in the Finchley advertiser. And because this is the American food chain most beloved by Londoners the 20 seats were still nearly all taken ten minutes after opening.

The Florence Cafe had been kitted out as an In-N-Out branch, but again, a lovely, incorporate wonkiness was very much evident with creasy banners draped loosely across the shop, hardly concealing its normal use. The staff were lovely, excited and English. "Have you eaten here before?" asked one, laughing at her own suggestion.

The menu choices? Basic. A hamburger, a cheeseburger and the mythical Double Double with two patties and cheese slices. Two further options, Animal Style and Protein Style, ie with yellowish relish or without buns, and menu options - no chips, just crisps - rounded the list off. The burgers were excellent, gooey, tangy affairs and with menu options at £6 remarkable value. "Just like they are in America" exclaimed several In-N-Out veterans, no mean feat when considering that the chain had at this point operated on British soil for about twenty minutes.

An American manager was asking for feedback without being pushy, all the while insisting this was only a one-off and not part of wider launch plans. A shame, of course, but also quite beautiful in its pointless quirkiness, not unlike Metallica suddenly playing a brief set on cheap rental equipment at your local Conservative club.

Florian Siepert runs www.foodtrips.co.uk which brings people who love to cook and eat together to create travel experiences in exciting culinary destinations.

Photos courtesy of Chris Pople from Cheese and Biscuits.