[SIGPLUS_EXCEPTION_SOURCE] Image source is expected to be a full URL or a path relative to the image base folder specified in the back-end but /blog/2014/iwm/gallery/ is neither a URL nor a relative path to an existing file or folder.
0
Shares 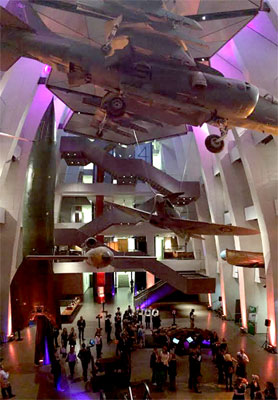 Hot Dinners was in attendance at the Imperial War Museum last night where Oliver Peyton was hosting a showcase of both the museum's facelift and his events company Peyton Events. The museum opened two months ago having spent millions on opening the museum up, putting in a new restaurant and bar and creating a dramatic atrium, designed by Foster & Partners which now houses a Battle of Britain Spitfire and a Harrier jet.

There are now two restaurants at the museum - a 144 seat cafe on the ground floor which opens up with a terrace on the nearby Geraldine Mary Harmsworth Park. A first floor tea room is close to the new galleries and there's an impressive party space - an enclosed 'roof terrace' up on the fourth floor suspended from the museum's glass roof.

We were there to try their party food which included bowls of mushroom risotto, braised ox cheek with mash and parsnip crisp and monkfish burger with chorizo jam as well as a range of cocktails including vodka gimlets and a Flying Ace negroni made with Hendricks gin. And very nice it was too.