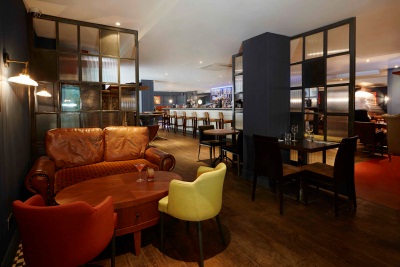 Hudson’s House was the first of two new restaurants to open this year at the St Giles Hotel in Bloomsbury (the other, VQ opened a week ago and is on soft launch till the end of October). It opened a little under the radar in summer and is getting a bit of a second push.

Designed by Alexander Waterworth who was responsible for Soho Beach House in Miami and The Club at The Ivy, Hudson's House features a cocktail bar and restaurant.

In the bar classic cocktails include the Caipirinha, French 75 or the Breakfast Martini. The all day restaurant with room for 80 features food ranging from Welsh Rarebit to cheese and meat platters and steaks.