Two new Saturday food markets are launching in the capital, one located in trendy Hoxton Market, another in the heart of the square mile at One New Change. Expect to see a fusion of established and new traders, selling everything from Turkish delights to Chinese dumplings. 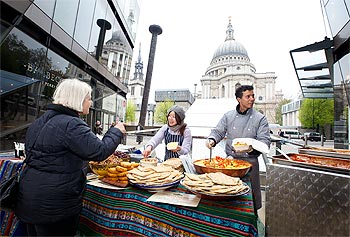 Next weekend, home-grown celebrity chef Gizzi Erksine will be launching the City’s first Saturday market at One New Change. Although during the week the vicinity is full of suits and briefcases, the opening will reclaim the city’s market-trading heritage. It’s an apt spot for some street trading - One New Change itself sits on Cheapside and apparently the word ‘cheap’ derives from the Old English word meaning market.

John Shepherd from Shepherd’s Food Markets told Hot Dinners, “The City has a rich history of food markets going back over 800 years. As fine food enjoys a resurgence across the capital it’s only right that we should bring some of the best artisan traders back to where they belong in the Square Mile.”

Gizzi will be entertaining Londoners on the market’s first day, giving talks at 11am and 2pm, and also signing copies of her latest book, Skinny Weeks and Weekend Feasts. She said, “There’s nothing better than spending a lazy Saturday discovering new ingredients to rustle up at home later. I love London, and it’s great to see One New Change reviving the City’s foodie roots.” 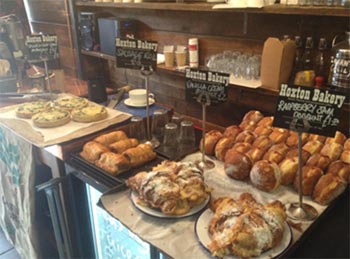 A little further east, another new market is launching on Hoxton Street on Saturday 8 June, showcasing a mix of food, craft and fashion. Matt Jones of Hoxton Bakery, who has been a helping hand in bringing in some of the traders, commented on the ambition of the market, saying; “Hackney is a place of true diversity and Hoxton Street Market has the spirit to reflect this. We want it to become a market that rivals the good general markets you find in countries such as France and Italy”.

Hoxton Street Market will give a platform to both local produce and ingredients from further afield, such as Colonel Tom’s Gumbo, Mark Hix’s Fish Dogs, and charcuterie from Cannon & Cannon. Joe Cannon of the brother-run company said, “We can't wait to bring the best of British charcuterie to Hoxton Street: the people of Borough Market already know how good this stuff is and it’s very exciting to be able to bring it to a new, and very promising, food market north of the river.”

The new market will be given a warm welcome by bricks and mortar traders, including F. Cooke’s Pie & Mash. Joe Cooke from the shop commented: “We are pleased to have new traders joining us… The inner London markets have changed over the years... but are still important. New stalls are just the start and with dedication from those in it for the long-haul, the spin off from a busier market and more customers will benefit all traders and businesses.”

One New Change market launches Saturday 1 June at One New Change, London EC2M 9AF and runs from 11am to 3pm - follow them on twitter @One_New_Change