[SIGPLUS_EXCEPTION_SOURCE] Image source is expected to be a full URL or a path relative to the image base folder specified in the back-end but /blog/2014/hubbard-menu/gallery/ is neither a URL nor a relative path to an existing file or folder.
0
Shares 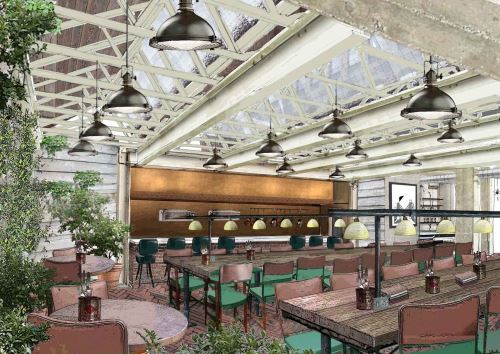 The Hoxton hotel is opening its doors in Holborn next week and bringing a range of useful places to eat and drink to midtown (yes we ARE embracing that term for London too) when it does.

Opening next week there'll be two restaurants run in partnership with Soho House Group. The first is Hubbard & Bell, their main restaurant (pictured right) which as you can see is set in a conservatory. The Head Chef will be Tim Fuller, previously Head Chef of the Fifth Floor at Shoreditch House.

The food at Hubbard & Bell is described as "top nosh with a French-American twist". Think grilled meats, seafood and small plates, in addition to a wide choice of breakfast dishes and a weekend brunch menu.

If you're looking for something more casual there'll be a branch of Soho House's Chicken Shop down in the basement serving up rotisserie chicken. Plus there'll also be a branch of Holborn Grind on site too on the corner of High Holborn and Newton St which is open during the day and evening.

Holborn Grind will be open Mon-Fri: 7am - Late. Sat-Sun: 9am-Late