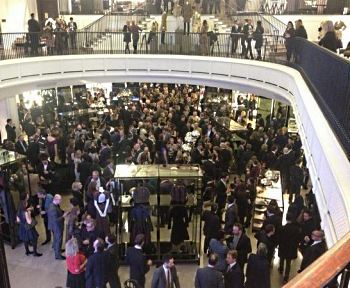 We don't often blow our own trumpets (well not much anyway) but - ahem - the London Evening Standard has just released its list of the 1000 Most Influential People in London and turns out we're two of them.

Never ones to turn down such exalted company, we popped along to the announcement party last night at the Burberry store on Regent Street (see picture) where we valiantly resisted the urge to splurge on a handbag or two.

Here's what they had to say about us: "Their website Hot Dinners was begun in 2009 inspired by the food blogs of New York and has since become the source of all London restaurant news from the latest openings to chef gossip. This brother and sister team get everywhere, fitting in writing around day jobs."

The Foodie section of the list is as follows together with Twitter handles where they have them.

Congratulations to everyone who made the Top 1000. You can read the full list with all the details over on the Standard website here.