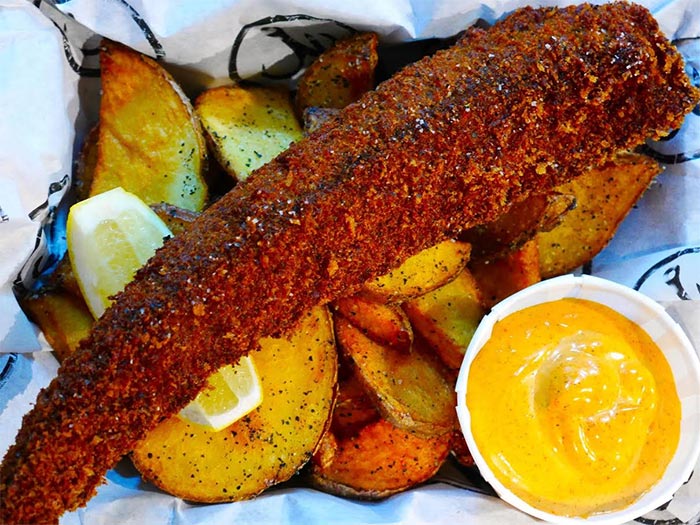 There's another restaurant on the way to the just-opened Pop Brixton, as Hook crosses from north to south with its next opening. Best known for their fish & chips in Camden (via Dublin and Brussels) their Brixton offering will be similar, with tempura style batters and fish crusted in panko crumbs laced with house grinded and roasted spices and with Cuban, Cajun and Jamaican jerk seasoning.

Fish will be delivered daily from Flying Fish Seafood Company with seaweed salted chips on the side. More sides include sea spaghetti & samphire citron salad, minty mushy peas, wakame & sprout pickle and celeriac, fennel & mustard seed slaw. They'll also have scallops, cod cheeks and squid on the menu and panko crusted free-range chicken if you just can't do without any meat. Sauces include their own tartar as well as garlic truffle, basil and chili, curry lime and lemon Cajun.

And for dessert, they have their own ice cream (which reveals some of their Irish heritage): spiced Guinness, white Russian and poitin & lavender.

It'll sit just 18 inside but will also seat a further 100 in its greenhouse - and there will be takeaway too.

Hook opens on 9 June at 53 Brixton Station Road, London SW9 8PQ opening from 12 - 10pm, daily (although not on Mondays for the first month). It's for walk-ins only and there's a soft launch until 14 June (with 50% off food) and will launch fully on 16 June. Find out more from them on Twitter @hookbrixton