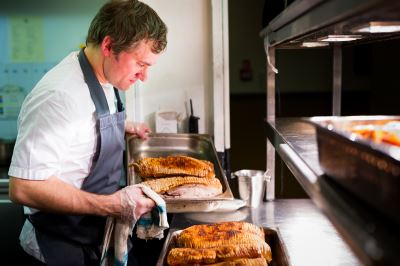 A good pub, handsomely restored is always a thing of joy, but there are a few more compelling reasons to be interested in the reopening of The Adam & Eve on Homerton High Street. Matt Chatfield of The Cornish Grill has roped in Alyn Williams from The Westbury AND the folk from The Quality Chophouse to lend a hand with the food.

Matt Chatfield will run the pub kitchen in conjunction with The Cornwall Project, a collaboration between Cornish suppliers and London chefs. Up until now he's been delivering the best meat, fish and veg to places like Pitt Cue, The Clove Club, Lyles, Pollen St Street Social and The Ledbury. The same produce will make its way to Homerton.

And to make things even more interesting, Matt's mate, the Michelin-starred chef Alyn Williams is consulting on the project. Between them they've come up with a menu focusing on British pub classics - so there's Hot Roast Beef on potato bread with mustard butter and gravy dip, The Philip Warren Burger with Cornish Yarg and what promises to be a top Sunday Roast.

On the bar snack front they'll have sausage rolls and other bar food from the Quality Chop House while @CharcuterEast are setting up pickling and curing sheds to supply house pickles and meats.

On tap you'll find beers from Hackney, Yorkshire, Cornwall and Boston with a daily rotating £3 Happy Hour. And not everything has been stripped out in the refurb, the pub's best-known feature - an L-shaped pool keeps pride of place.

The Adam and Eve opens at 155 Homerton High St, London E9 6AS for a soft launch 'Gout Fortnight' from 30 June 2014 serving food at 50% off. For more information follow them on Twitter @adamandevee9