Holborn Dining Room to be the Rosewood's new restaurant 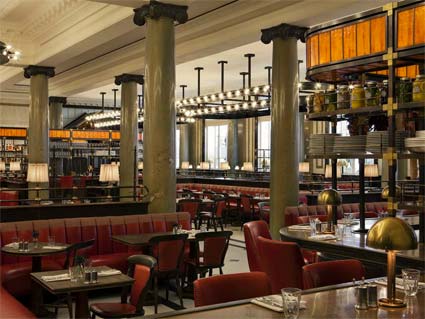 We've been hearing about the new Rosewood hotel for a while now, ever since it was revealed that it would see Bjorn van der Horst involved in the food.

Now we have exclusive news on what to expect from the main restaurant in the hotel, the one that's taken over the very impressive space that used to host Jun Tanaka's Pearl. The new restaurant will be called Holborn Dining Room & Delicatessen and will be operated by Des McDonald, who has already had great success this year with Islington's Fish & Chip Shop. Focusing on British Cuisine, it will be open for breakfast, lunch and dinner, seven days a week - and will comprise of a restaurant, rock bar, delicatessen and an open terrace which overlooks the hotel courtyard.

The kitchen will overseen by Lee Bull - who did the same for the Fish & Chip Shop in Islington - who will be working with David Burke (former Executive Chef of Le Pont De La Tour). Up front will be Maître d' Jon Spiteri, best known from his time at Quo Vadis and St John.

As for dishes, they'll include:

The London particular fritters that we love from the Fish & Chip Shop are appearing here too and there will be retro desserts like steamed jam sponge and banana with custard. Alongside the main menu, there will be a High Tea menu with fish finger sandwiches and a cake of the day.

There will also be the Holborn Delicatessen, which will open directly onto High Holborn selling coffee, soups and sandwiches as well as lots of deli fair.

The restaurant itself will be designed by Martin Brudnizki, whose work can be seen across town in places like Wild Honey, 34, Dean Street Townhouse and whose design we were really impressed with at Angela Hartnett's Hartnett, Holder and Co in Lime Wood. It will apparently feature "impressive chandeliers, reclaimed oak furnishings, antique mirrors and leather upholstery" and seat 150.

The Rosewood Hotel will also have another restaurant, the Mirror Room, which will offer "contemporary fine dining". Expect more details on that restaurant soon, too.