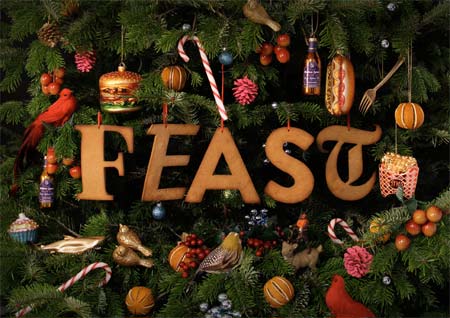 Various areas of London have been blooming with all number of foodie treats this year, but one blossoming area that's most appreciated by Hot Dinners (as it's our backyard) is Islington. And that's why we're particularly pleased to see that the successor to this year's popular Feast is taking place on Islington Square in early December for a special pre-Christmas appearance.

It's accompanied by a highly impressive range of contributors who will all be providing food, cocktails and much more for the gathered festive throng. The list - so far - features:

And their menus are as follows;

You can also expect Bompas & Parr to be there too for a special experiment for which they “plan on casting a haunting and eerie glow on the upturned faces of the assembled attendees of the FEAST. A total sensory assult”. There will also be live entertainment, including a display by the Royal London Ballet. And the whole thing will be covered, so there's no need to worry about the heavens opening.

Feast runs from December 6-9 in Islington Square (just off Upper Street) and tickets cost £9 from the Feast website.