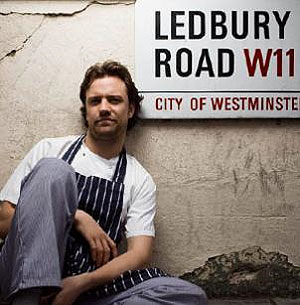 Zagat launched their 2012 restaurant guide for London at Wolfgang Puck's CUT at the Dorchester Collection this morning, amongst a throng of top London chefs and restaurateurs. Tim and Nina Zagat were on hand to announce the results of the new edition, and Wolfgang Puck himself was also present at his most recent opening, his debut in London.

The "Burgundy Bible" as it's affectionately known, released its results as voted on by 5,497 diners, with reviews of 1,187 restaurants in Greater London.

Top gongs went to Dinner by Heston for Top Newcomer, The Ledbury for Top Food, The Wolseley for Most Popular, Waterside Inn for Top Service, Sketch for Top Decor, and Chilango for Best Buys.

Trends in London dining highlighted by the guide include the emergence of the mid-range market with restaurants in Russell Norman's Polpo group leading the charge, alongside Opera Tavern, 28-50, Henry Root, Chabrot and Bar Battu.

Internet reservations for restaurants continue to rise, up 17% from 2008. Texting and tweeting at the table is seen as "rude and inappropriate" by 53% of participants in the survey, however 73% feel it's "ok" to take pictures of food.

Ashley Palmer-Watts, head chef at Dinner by Heston, was delighted with the award for Dinner: "For us to get an award is brilliant, it's been an amazing year for openings. I'm proud of the team, but there's a lot of hard work ahead."

Ashley has been busy on the domestic front too. "I've just had a baby girl, and this is my first day back! We're re-opening on 21st of September with a few changes to the menu."

Chris Corbin was beaming as he collected the award of Most Popular for The Wolseley, but conceded that opening and running it was the "hardest thing we've ever done."

Wolfgang Puck is in town until next week before whizzing back to the States, and likened his new project CUT at the Dorchester Collection to the responsibilities of being a parent. "You have to eventually let them go, but we've got a strong team here."

Heading the kitchen at CUT is one of Puck's stalwarts, Head Chef David McIntyre. "There's a great vibe here, I love London. We've been here for nine months, we moved the family here, so we're here for the long haul."

With a final flourish, Tim Zagat was as optimistic as he has ever been about dining out in London. "There has never been a better time to eat out here. London is now amongst the two or three best cities to eat out in the world. Almost every neighbourhood has a wealth of choices for great food at excellent prices - you can't go wrong."

Zeren Wilson has his own restaurant review site Bitten and Written. Follow him at www.twitter.com/bittenwritten