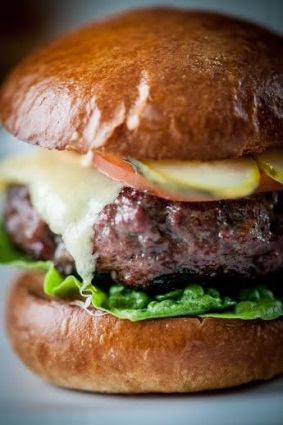 Let's be honest, Heston Blumenthal could open an edible envelope and there'd be a host of foodies there to document it - so when word got out that he was opening a restaurant at the new Terminal 2 at Heathrow, there was quite a lot of international interest in it. Add to that the fact that only people travelling would be able to eat there and you've got a hot ticket already.

Hot Dinners caught up with Heston's right hand man (and Head Chef at Dinner by Heston) Ashley Palmer-Watts to get ALL the details on what to expect when The Perfectionists' Cafe opens in June.

First things first - a few details about the space itself. It'll have room for 155 people. On the right hand side as you enter will be a sweeping high level marble-topped bar on the right. On the left there'll be the kind of casual space for anyone popping in for a quick coffee. There'll be two big communal tables in the middle, banquette seating along the balcony overlooking the concourse and there will also be tables for those who have a little more time for more comfortable seating.

One of the first things people will see as they enter will be the liquid nitrogen ice-cream parlour serving up ice-creams made with all manner of toppings - think chocolate coated coffee beans, dolce crispy chocolate balls, diced fudge, yoghurt popping candy, crystallised rose blossom, caramelised wafers and served with an edible chocolate spoon.

There will be two ice-cream sundaes on offer too - a black forest gateau with vanilla and chocolate ice cream, sour cherries, whipped cream, chocolate brownies, popping candy and a kitsch heart-shaped wafer as well as a classic berry sundae with meringue, whipped cream, berry sauce. While the gateaux and sundaes are eat-in only you'll be able to buy the ice-creams to take away to whatever gate you're heading towards.

Having tasted upwards of 20 black puddings just for starters, a lot of thought has clearly gone into the breakfast offering here. A full English is going to be around £9.25-£9.50 and consist of Stornaway black pudding, two eggs, two rashers of bacon, grilled tomato with brown butter and thyme oil, beans, toast and a field mushroom roasted in thyme butter. Or you can just go for a bacon sarnie with some black pudding as extra.

The rotisserie chicken will come with bread sauce and either salad or fries for £12.75 - but you can also get charcuterie plates from the deli or the Heston's salt beef sandwich with dill pickles and rye bread (around £8.50) - that's "absolutely amazing" according to Ashley.

Using a wood-fired pizza, the cafe will turn out true Neapolitan pizzas - ranging in price from around £8.50 to £10. There'll be the Enzo named after Enzo Coccia - the pizzaiolo from Naples who consulted on the project - which will feature tomatoes, provola, buffalo ricotta and rocket. The Four cheese will be Provola, Pecorino, Fontina and Gorgonzola and there will be three other varieties.

"We're open to what people want, but there'll be no stuffed crust, ham or pineapple or that kind of thing." As for the toppings, they'll make their own ricotta daily in the wood oven at the end of the night. "You slowly heat the buffalo milk up in the oven so it takes on a gentle wood oven note. And that'll be the ricotta we use in the pizzas the next day." 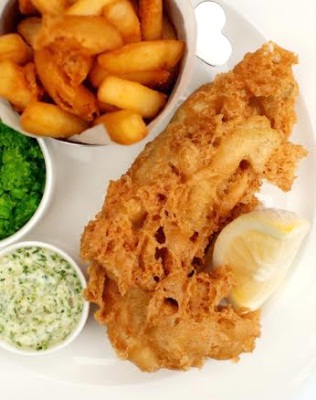 As for the fish, it'll be all day boat, line caught sustainable Cornish fish. Predominantly it'll be Haddock, but as with all these things which are weather dependent and seasonal it may flip to Ling, Hake or Codling. "The batter we've been working on where we left off with the Perfection TV series. Doing something for a small amount is one thing, but doing something which could potentially be serving 1500 people a day is another matter."

"Julian, our head chef, has been working on the batter with natural starches in combination with flour, water and beer. We charge that in a CO2 siphon and then discharge that out into a bowl so your batter has the most amount of bubbles it can possibly have. Those minute bubbles expand as soon as they hit the hot frying oil to create the texture and network of a really good batter - very glass-like texture, really crispy and it stays crispy for a long time, yet protects the fish inside."

It all sounds very complicated. "It's a hard technical thing to get right. The most disappointing dish in this country, as a whole general statement, is probably fish and chips. You have this idea that the next time you go back it won't be that bad, but it is! Unless you're lucky and you have an amazing fish and chip shop nearby - but you can count those on one hand. That'll come with mushy peas, tartare sauce and chips."

For the last few years the only Heston-related burger was one the group is serving at their pub The Crown in Bray (or one from Waitrose). So there's going to be a lot of geeky burger interest in what the new place has come up with. Served with fries, the hamburger will be around £13 with an additional £1 for a cheeseburger.

The bun will be a toasted brioche milk one - "They take a brioche and add cream to the dough. The purpose of the bun is that it needs to be soft and airy. It needs to have a functionality where if you're a third of the way through the bun still needs to be holding a good shape with the burger in it. By the end of it you don't want to be in an absolute mess."

The sauce will be a mixture of tomato ketchup, Frenchie's mustard and mayonnaise all in one.

The patty is a mixture of chuck, brisket and ribcap "which get mixed and minced and as it comes off the mincing plate. We've had a special mincing plate made that when meat is forced through the 6mm plate it's captured in a tubular bag that fits the size of the burger we're making. So all the strands of the burger line up. You roll it gently so it compresses just enough to hold it together. You chill it and then you slice through that making the burger shapes. So when you go to eat the burger, the burger falls apart really nicely, so you're breaking away these tubular stacks of meat which make up the patty. The burger delivers lovely little pockets of juice and fat rather than a homogenised compressed mix."

For the cheeseburger they'll use Hafod - "a Welsh cheese which melts really nice and has a really lovely flavour."

So how much time will people have to sit down and enjoy your food?

"[BAA] have learned so much from T5 and have taken it to the next level - they reckon the average time from someone entering the airport to being cleared through security is 5 minutes. So you'll get in - do your shopping - and if you have your timing right, that's the time you'll be looking for somewhere to eat."

How has the process been, working with BAA?

"Heston had this vision of what he wanted this place to be and then we go on this journey and try and make it into reality. It never is quite as you start off - you work on it, evolve and there's this huge amount of learning - it's not a world that we're from, that's for sure."

There's obviously a need to deliver meals within a tight time frame...

Airport restaurants can be pretty tricky and I always get let down by the standards. It is a challenge and there are different rules. You're within an environment that's very different. We're not going to cook a whole load of stuff ahead, pop it in some warming drawer and serve it - we woudln't even bother opening that restaruant. We turned the time limit on itself [to see what'll cook in a short space of time]. A pizza should cook within 60 seconds of going in the oven - you can turn around a burger and fish and chips in that time. You use that to be something that forces your quality - you just have to have the perfect process.

I went to one restaurant where my burger was there quicker than my glass of wine and everyone knows that was cooked hours ago and has been sat somewhere as grey as a pavement. It was terrible. Food does take time to cook, but you can do it within that time.

So is this equally about doing airport food well as being a beacon of good British food?

It's about fantastic food fast. We don't want to be a jack of all trades and master of none. This is about getting a few things really right and not overly complicating things. Our will be a discerning customer that's looking for quality and simplicity. The place will be light-hearted and casual and going to have a good buzz to it.

We've just had our first playlist through - it's a directional playlist - we've been working with someone called the Music Concierge who, once he understands your restaurant and whatever you're trying to do, will work with you, with their huge knowledge, marrying the music up to your concept.

What about wine and beer?

Isa - our sommelier at The Fat Duck - and his number 2 and 3 have been tasting somewhere in the region of 220 wines to get down to the 20 we're serving. It'll be an international wine list. We're looking at beers right now.

So will there be English beers on the list?

We will try - when they're really good. But this isn't a set thing. Once you open, you never stop tweaking it. We may end up with an all English beer list or none, it depends on what people like.

What about takeout? Will you do picnics to take on board?

Well you can take stuff from the deli - it could be the cold meats from the charcuterie or a chicken salad sandwich from the rotisserie. But definitely not the burger or the fish and chips. We'll see what the demand's like.

The Perfectionists' Cafe opens on 4 June 2014 at Terminal 2, Heathrow Airport. They'll be open for breakfast at 6am and until the last plane departs in the evening.