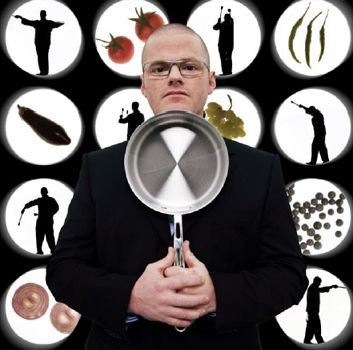 13/5/14 - Update - we get the full details on what to expect from the Perfectionists' Cafe.

We've known a while that Heston was opening a new restaurant at Heathrow's latest terminal. Although we've been calling it Heston at Heathrow up until now - we have to admit we do like the sound of its real name - The Perfectionists' Café.

He's been working on the concept of the restaurant with his Group Executive Head Chef Ashley Palmer-Watts (best known for Dinner) and Head Chef Julian O’Neill and as expected, Heston's taken the opportunity to work out what really works as airport food to heart. He'll be aiming to cater for everyone as "some guests will have very little time to spend with us and others, in transit or with longer check-ins, will have time to linger."

You'll be able to track down the café by the large mechanical clockwork knife (which is like the one in the logo) and the restaurant is inspired by his recent Channel 4 show, In Search of Perfection. So that means burgers will be made by grinding all the meat grains in the same direction to maximise the juiciness of the meat (something you'll also find in his Waitrose burgers) and fish and chips will be served with "the ultimate crunchy batter" while pizzas will be cooked in the first ever wood burning oven in Heathrow (although Jamie does apparently have one of those over at Gatwick).

It'll be a sizeable restaurant, taking over 443 square meters and it'll be the first thing you see after security - which means that only people flying from Terminal 2 will be able to try out the café (that's Star Alliance, Aer Lingus, Virgin Atlantic Little Red and germanwings).

The Perfectionists' Café will open in June at Heathrow Terminal 2.