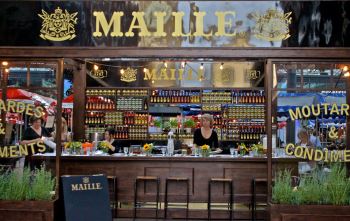 Brunch? Bof - that's so 2012. Apparently now it's all about Le Drunch - a concept winging its way across the channel from Paris. It's their term for the meal that's seen lunch slip slowly towards dinner at the weekend. And now it's in London at a popup in Spitalfield Market for one week.

The pop-up by mustard folk Maille will see two Michelin-starred Chef Hélène Darroze serve up a special six dish Le Drunch menu at the Maille Boutique in Spitalfields Market from 15th-24th March. And the good news is anyone can book to try it for free - if they're fast enough. Early tickets were snapped up the minute they went on sale, but a little bird told Hot Dinners that more are going on sale this morning.

To book go to www.maille.co.uk where sittings can be reserved between 3pm-6pm for a maximum of four people. There will also be a few walk-in spaces for each session too. Visitors to the popup can also shop Maille’s extensive range of mustards, condiments and sauces, including a fresh Black Truffle mustard, served straight from the Maille mustard pump.