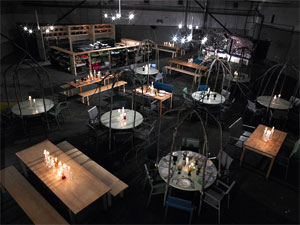 Jacques Chirac once sneeringly referred to the UK as having the second ‘worst food’ in the world. Taking the top spot on that coveted list? Finland.

Aiming to prove that the UK and Finland have more in common than jostling for position in a worst-of list, a brand new pop up concept has taken up residence in an unused warehouse close to Old Street to showcase the latest in Finnish food and design. Hot Dinners was lucky enough to get a sneak peek of Hel Yes! - the new cool Finnish breeze blowing through the East End during the London Design Festival.

Commissioned and produced by the Finnish Insitute in London as part of a series of events to celebrate Helsinki’s upcoming title of World Design Capital 2012, Hel Yes! conjures up a magical, intricate woodland scene in the heart of industrial London. From melancholy snowy woodland film scenes playing in a silent loop in the entrance to the low-lit chairs and tables wreathed in tangled branches, this is somewhere between eerie fairy tale and Moominland. 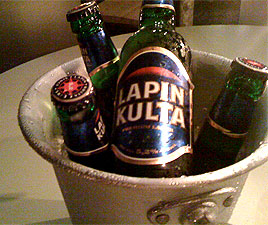 Although the full rolling menu won’t be unveiled until the official opening on September 15th, the focus here is on classics, done well. Frosty dark berry cocktails complement the glacial air, twinned with malty Finnish beer, while in the kitchen the emphasis is on simple, clean tastes – a glimpse of the Finnish preference for uncluttered, unpretentious plates.

Featuring traditional fish, game and preserves plus ‘a daily special ingredient foraged by Hel Yes!'s own team of hunters and gatherers around London’, the full menu is the brainchild of rocker-turned restauranteur Antto Melasniemi.

“The Finish flavour is primitive and unprocessed” said Antto, pausing over a steaming plate of simply cooked potatoes in a soul-warming cream sauce. “We want to show that food can be powerful at its most simple – textures and tastes without pretentions.”

Nicola Piggott is a freelance journalist and Moomin fan