[SIGPLUS_EXCEPTION_SOURCE] Image source is expected to be a full URL or a path relative to the image base folder specified in the back-end but /blog/2013/NYC/day5/gallery is neither a URL nor a relative path to an existing file or folder.
0
Shares

Our fifth day in New York is cold but bright and sunny. After a quick pastry from Brooklyn Fare which handily is barely a five minute stroll from our Brooklyn hotel - it's time to head over to the popular food market, Smorgasburg, that only runs during the summer months. 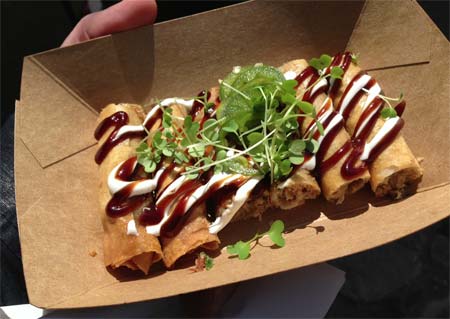 What we ate: It didn't feel right, coming to New York and not trying out any of the street food scene, so a trip to Brooklyn's summer food market, courtesy of Brooklyn Flea, seems a good idea on such a sunny day.

It's held down at the Tobacco Warehouse (a ruin that's open to the elements) at Brooklyn Bridge Park on the DUMBO (Down Under the Manhattan Bridge Overpass) waterfront. We turn up at the opening time of 11am ready to graze, but a lot of the traders are still setting up, so we're a mite early.

There's a mixture of stalls selling pickles and sodas to go as well as hot food vendors. Our first dish is a pulled pork hash with fried egg from Hash Bar which is nice, but not earth shattering. A warm lobster roll from Red Hook lobster pound is nice but pretty pricey at $16. We're starting to think this whole thing isn't quite what it's cracked up to be until we try the day's special spring rolls from Filipino food stall Lumpia Shack. Billed as slow braised pork belly and shoulder, chives and greenmarket ramps, these are utterly brilliant and a bargain too at $8. That's followed up with a bacon cupcake from Kumquat Cupcakery - well we had to - and some fried chicken from Buttermilk Channel which comes with cheddar waffles and some great vinegar honey.

So, Smorgasburg is fun to visit and a good thing to do on a Sunday when nothing else is open, but to be honest, London does this kind of food just as well if not better. On the downside, we thought a lot of the stalls were expensive, but it was nice mooching around and sitting down by the river with Manhattan laid out in front of us with some street food, so we'd still recommend a trip here. 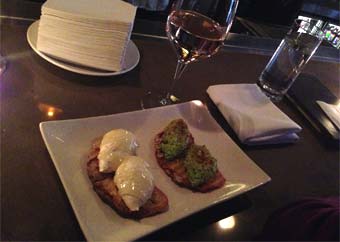 Recommended to us by New York food and drink blogger Laissez Fare, this West Village wine bar is definitely worth making a detour for.

It's friendly, the wines we tried were both interesting and delicious and the bar snacks are ace. Choose from a range of crostini - but the ricotta with sea salt and honey is the best. 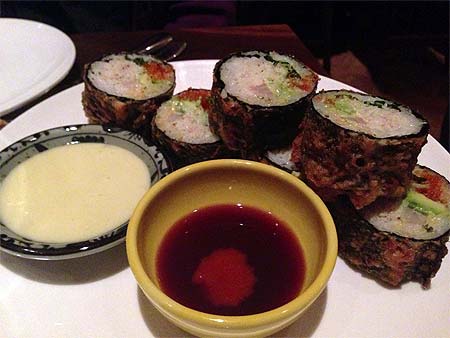 What we ate: This West Village restaurant opened late last year and is the brainchild of restaurateur Gabriel Styulman who also owns Joseph Leonard and Jeffery Grocery in this neighbourhood. They describe this tiny 28-seater restaurant as an 'untraditional and unconventional take on a Japanese Izakaya'. What that means in practice is that the food's a mash-up of American and Japanese cuisines, which makes for a whole lot of fun.

We start with a pork and unagi (eel) roll - wonderful - and then caviar on buttered toast - which was great, but gone in two mouthfuls.

A favourite dish is the maki tempura roll; essentially deep-fried sushi this is probably the restaurant's best example of so-called 'stoner sushi' food. We love it. We also rated the duck chirashi with kimchi, aioli and scallions.

What we ate: These late night cookie spots are all over town by various university buildings (wonder why?!) and deliver until 3am. Warm cookies after a night out on the town. Genius.

After this, we headed back to our last hotel, the Intercontinental Times Square, which is blessed with a dangerously convenient Shake Shack right next to its lobby that's open till midnight. So, of course, we couldn't resist one more burger and a wonderful salted caramel concrete. We've been in so much during this week we're practically due a loyalty card.

With just hours to go before heading to JFK we take advantage of the sunshine and head downtown for a walk through the High Line park. Having worked up a final appetite, it's next door to the Chelsea Market where The Lobster Place has just reopened after a three month refurb. 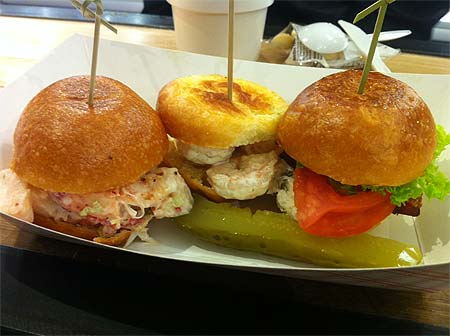 What we ate:  This seafood favourite now has a standup oyster shucking station, a sit down sushi bar and - towards the rear of the space, Shack at the Back now serves up lobster rolls, Oyster Po' Boys and more.

We went for the slider sampler - three brioche rolls, one with lobster, mayo and spring onions, one with shrimp and tarragon mayo and the final (and best by far) crab club sandwich with saffron aioli which was so good, we're missing it already. They also do a picnic box lunch to take out with one of the rolls, a bag of Cape Cod chips, an oatmeal raisin cookie and a Maine Root soda from $12.95 which would be great for a picnic lunch on the High Line.

It's a good end to our final day in New York.

Dinner - Pre-flight dining at the British Airways lounge at JFK 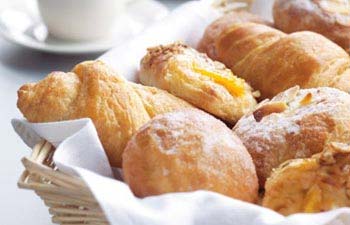 We're heading home on the seductively named Champagne Supper Shuttle from JFK to City Airport, but rather than eat on board, we decide to take advantage of their pre-flight option at Terminal 7 of JFK. There's an extensive buffet on offer here - plenty of attractive salads, and a 'celebrity chef' option of Thai dishes. But we're hankering after home, and the cider-braised chicken with mushrooms smells and tastes great.

There's a really interesting selection of American wines to accompany them (would be nice to see more of these on board) - and if we wanted, there's a cheeseboard to finish.

Barely seven hours later, we wake up in the air having swapped the skyscrapers of New York for those of Canary Wharf. It's a quick breakfast of warm croissants and fruit salad - and a much needed great cup of tea - before we land.

We're home and it's been a blast.