[SIGPLUS_EXCEPTION_SOURCE] Image source is expected to be a full URL or a path relative to the image base folder specified in the back-end but /blog/2013/NYC/day4/gallery is neither a URL nor a relative path to an existing file or folder.
0
Shares

On our fourth day in NYC we head over to Brooklyn to check out the scene there... 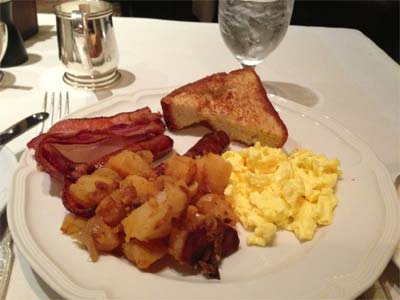 Where: Upper east side

What we ate: We have to admit, we haven't stayed at too many Grande Dame hotels, but the Carlyle definitely fits that description. Its restaurant has Aubusson rugs on the floor and Fortuny silk on the walls. This is not a casual spot.

Happily, a Friday breakfast turned out to be a relatively leisurely meal and it's clear that plenty of people come here for meetings too.

This hotel breakfast is a linen-tabled affair with iced water poured from silver jugs and plenty of good strong coffee - choose from either French Press Coffee - Ethiopa Yrgacheffe or Costa Rica La Minita.

And so - to Brooklyn. Having only spent an evening in Brooklyn before we decided to cross the bridge and spend one night in a hotel there, to better get a feel for the place. We had a LOT to get in, in just 24 hours. So no lunch for us, bar a little light stall grazing at the Brooklyn Flea, where you'll see some of the food stores from the more foodie Smorgasburg (more on that in the next update). 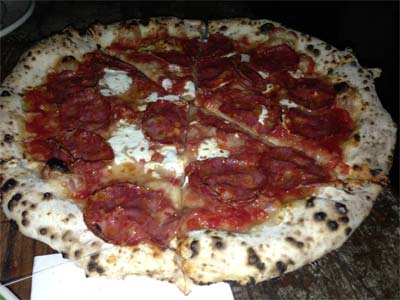 What we ate: Most people presumed we'd be eating at the famous Brooklyn pizzeria Roberta's, but thanks to New York bloggers Immaculate Infatuation, we headed on their recommendation to Paulie Gee's way up in Greenpoint.

This former stable has been given a rustic chic look and apparently serves up some of the best pizzas in town. It opens at 6pm, so when we pitched up only half an hour later we had an hour's wait on our hands. But they don't mind you popping off as long as you're back to claim your table, so we nip to a nearby bar for a quick drink while we wait. Happily that pizza is worth waiting for.

Tempted as we were to order a pizza called the Delboy we instead opt for its hotter relative - the Hellboy. This features fresh mozzarella, tomatoes, Berkshire Sopressata Piccante, Parmigiano Reggiano and - the ingredient that really kicks ass - Mike’s HOT Honey. This mouth-numbing chilli honey is what transforms this pizza from a merely delicious one into a great one. But we only order one to share - we have more eating to do tonight.

Also in Greenpoint, this beer bar is one of the hottest New York openings of the Spring, having opened its doors just a month ago. It's the brainchild of chef Daniel Burns (former head of research and development for the Momofuku restaurants) who also worked at The Fat Duck and who was also the creator of the pastry programme at Noma.

He's teamed up with the wonderfully described gypsy brewer Jeppe Jarnit-Bjergsø of Evil Twin brewery to create this temple to craft beer. With over a hundred bottled beers and 21 on tap, this is beer heaven.

When we went there was just a few basic dishes to soak the beer up - rye bread and basic charcuterie. But the back room here is a restaurant expected to open in May with Daniel serving up five course tasting menus for $55 with the option to go for beer pairing too. 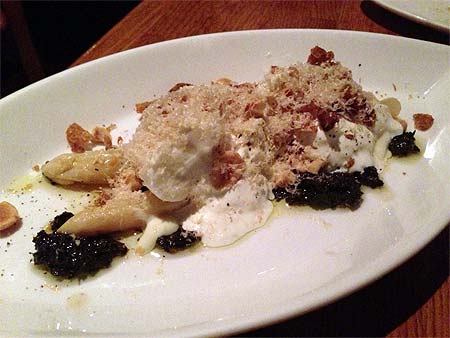 What we ate: Jewish chef Jason Marcus opened this restaurant in 2010 - the name means non-Kosher in Hebrew - having done his time in restaurants like Le Bernardin and Eleven Madison Park.

This neighbourhood joint has, for the size of the restaurant, the smallest kitchen and pass (and busiest) we've ever seen. Much of our time here is spent marvelling at how they manage to turn out such an extensive menu from so small a place. There's around 10 small dishes and 6-8 'main' courses to choose from. Our favourite dishes were the burrata with morels and also the pork belly with sugar snap peas, but the sauteed broccoli rabe, roasted portobella-truffle toast, fried egg failed to thrill.

All in all, we had an enjoyable dinner, but we're not sure you'd cross the Atlantic for a meal here.