Day One of our 2013 New York Trip sees us checking out the newly-opened 'gastropub' from Willie Dufresne and a much-lauded Mexican restaurant. 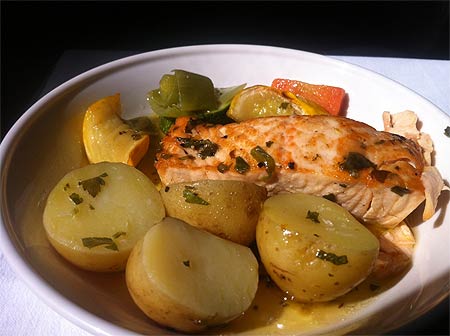 Getting there in the BA1

It's been two years since we've been in New York, we've been planning our itinerary for weeks and weeks and it's finally D-day. And if this trip continues the way it starts - well then we'll be very happy bunnies. There's no easier way for Londoners to cross the Atlantic than from London City to JFK - which is how we find ourselves travelling.

We took the iconic BA0001 flight - once reserved for Concorde, now the number for this flight which has one very major selling point. One of our least favourite bits of arriving in New York is spending an age in the queue for immigration. This flight touches down briefly in Shannon Airport in Ireland where you clear immigration in barely 10 mins. You land in America as a domestic flight and breeze through without even having to show your passport. This we like.

The flight is an all-business one - just 32 seats, so it feels (not that we know, mind) more like a private jet than anything else. Lunch - the menu was created in conjunction with Borough market restaurant Roast - is a cured meats platter with cheese, followed by roast salmon with beurre noisette and then a really good rhubarb cheesecake. Looking at the short, but interesting wine list, we start as we mean to go on with an American wine - a Reata Chardonnay from Carneros in Napa Valley. We settle down with iPads loaded with movies, have a kip on the flat beds and arrive in JFK raring to go.

Arriving at the Lowell

Our hotel for the first two days is boutique luxury spot The Lowell (we'll have a full review of this later). The one bedroom suite we're in looks like the set of Gossip Girl. It's frankly bigger than @hotdinners2's flat and much, much nicer. There's a massive lounge complete with walnut dining table, a fully-stocked kitchen with the biggest fridge/mini bar we've ever seen. The sun is shining and we have a compact but bijoux terrace overlooking the Upper East Side. Life feels pretty good about now.

We sip a flute of champagne on our terrace to toast the Big Apple and head out into town. Here's a summary of the best things we had on our first night... 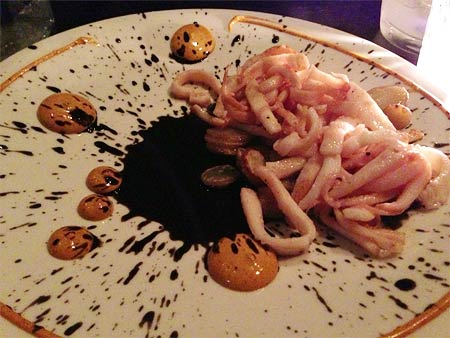 Why: This Mexican restaurant is the only New York spot to make it on to the shortlist for Best New Restaurant in the 2013 James Beard Awards (very high profile and much-respected awards in America). Chef Alex Stupack was also announced, just two weeks ago, as one of Food and Wine magazine's Best New Chef of the Year. They say "Empellón's approach to cuisine is informed by authenticity but not limited by it". That makes for a really interesting menu.

Dishes: There's been a lot of talk about the pistachio guacamole with masa crisps and it lives up to the hype, blowing away anything we've eaten in London. But the standout dish here is the seared squid with black mole, potatoes and chorizo mayonnaise. Not only does it look stunning on the plate, it tastes amazing. The squid is super-fresh without even a hint of chewiness and goes brilliantly with the spiky chorizo mayo.

We follow that up with a couple of tacos - best of which is Alex's take on the classic pastrami sandwich - shortrib pastrami with pickled cabbage and mustard seed salsa.

Drinks: We had a classic margarita ($12) and a Reposado Margarita with butterscotch, pepper and vanilla ($15) both of which kickstart our system and ward off impending jetlag.

Why: This new-ish cocktail room has had a lot of buzz - the people behind it used to work at Death & Company and Milk & Honey. Once we've persuaded the bouncer that he honestly doesn't need to see our IDs (take something with you if you go to avoid this) we head up to the bar.

The place is busy-ish on a Wednesday night. It has a very east London vibe - we imagine it's crammed at the weekend - and our cocktails are both interesting and strong. 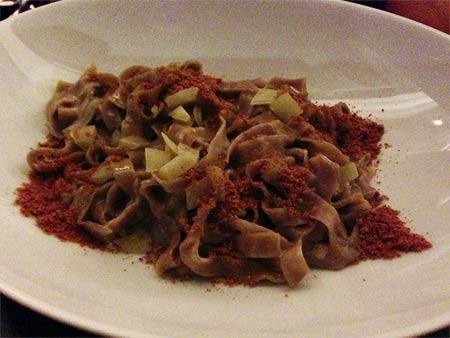 Why: Willie Dufresne is a god on the New York circuit - we visited his groundbreaking and award winning restaurant WD50 the year it opened. That was 10 years ago and this is only his second place to open. You may imagine how excited NY foodies have been about that - the queues have been down the block. Pitching up just before 10pm we avoid the queue but the place is still buzzy.

Dishes: As this is our second dinner of the night, we keep the orders to a minimum, choosing what we know has had a good reception on New York's blogosphere.

Pigs in blankets turns out to be Chinese sausage and comes with dots of sweet chilli and wasabi sauces. But our favourite turns out to be our second interesting take on the pastrami sandwich in one night. The somewhat blandly named rye pasta dish is actually carraway pasta, with shaved pastrami and pastrami jerky dust sprinkled on top. Someone on Eater has described this as a Reuben in noodle form; it's utterly brilliant.

Our dessert of banoffee pie is notable for the candied banana shards and one cocktail in particular - the Piney Pimms is one of those sounds strange on paper but works amazingly well in practice drinks - pine and Pimms, who knew?

Note - Hot Dinners were invited to fly on the BA1 and stay at the Lowell. Our food at Alder turned out to be complimentary but we weren't aware of that until we had eaten.