[SIGPLUS_EXCEPTION_SOURCE] Image source is expected to be a full URL or a path relative to the image base folder specified in the back-end but /blog/2012/hawksmoor/gallery is neither a URL nor a relative path to an existing file or folder.
0
Shares 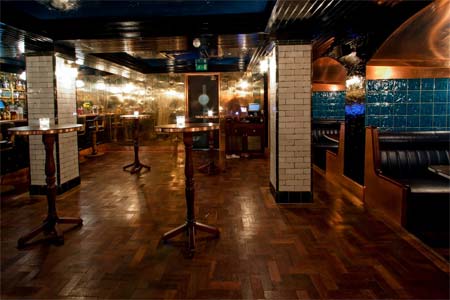 Every good restaurant should have its must-have dish and at the brand new Hawksmoor bar at Spitalfields, opening March 3, it's definitely the poutine.

Originally a Canadian snack - chips, gravy and some incredibly stringy curd cheese, embellished Hawksmoor style with chicken or oxtail. It's the bar snack of kings and either the perfect cure for or preventive dish for a hangover. But there's also much more to the new opening.

Hawksmoor has never failed to impress with its bars and the brand new space at its Spitalfields original continues in style. The space takes what was originally a storeroom and completely revitalises it with a weathered look that takes influences from the bars at Seven Dials and Guildhall while still creating its own identity. The banquettes under the arches in particular are likely to be the most sought after seats in the area.

The bar's menu also takes a slightly different turn from previous Hawksmoor bars - with a stronger emphasis on dishes you can share. So there's the aforementioned poutine (£6), some deliciously rich short rib nuggets (£6), chicken wings (£5) and what is referred to as the healthy option - Tamworth laab. This is a minced pork dish with a Thai chilli kick which you wrap up in lettuce leaves (that'll be the healthy part).

On top of this, and emphasising that the bar is separate from the dining experience at Hawksmoor, there are also slightly smaller versions of some Hawksmoor classics specifically redesigned as bar food. So you have the classic umami burger (£9.50), cheese burger (£8.50), chicken burger (£8.50), a fantastic chilli cheese dog made from Ginger pig meat (£10) and the short rib French dip - short rib beef in bread with a gravy dip (£10).  The lobster roll will also be on the menu, along wit a weekend only sausage and egg HkMuffin.

And a Hawksmoor bar wouldn't be the same without some of the best cocktails in town. The bar has many of the current classics on the menu but will also include a section of "Desert Island Drinks". Each month, one of the head barmen from the Hawksmoor group will choose their five desert island drinks to go on the list - and those barmen will also be running the bars themselves for the first and last night of that month.

The new Hawksmoor bar at Spitalfields launches on March 3 2012, starting with a week’s soft launch with 50% off food prices. It's going to be hot.