[SIGPLUS_EXCEPTION_SOURCE] Image source is expected to be a full URL or a path relative to the image base folder specified in the back-end but /blog/2014/hawkspics/gallery/ is neither a URL nor a relative path to an existing file or folder.
0
Shares 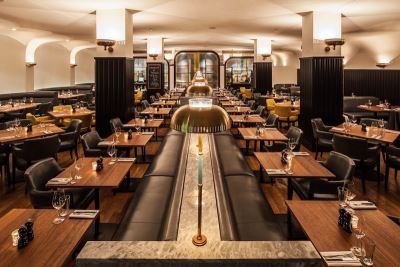 A new Hawksmoor is always something to look forward to and now more details have been revealed about the steak emporium's venture west to Knightsbridge.

Taking over the site that used to be jockey Frankie Dettori's restaurant Frankie's and has re-styled it in 1930's Art Deco. It'll have a basement restaurant like Seven Dials (pictured) which will seat 130 with another 25 in the bar. They're also continuing their successful collaboration with Mitch Tonks, so the menu will be a mix of steak and fish with Asian influences on the menu this time too.

We've just seen the full menu and there are a few things on here you won't have seen in any other Hawksmoor. For starters, there's a caviar section - from ethically farmed Finnish sturgeon. Steak tartare and caviar for 2-4 people is £100 and we bet that'll be popular here. Other new takes include the whipped butter that comes with the Brixham lobster,

There's a nice looking set menu too (available at lunchtime 12-3pm and 5-6.30pm) which is two courses for £25 and three for £28, which is pretty amazing if you start with steak tartare, throw in a lobster roll and finish with a lemon meringue sundae.

And given the rapturous reception the salted caramel rolos received at their last opening, they'll be available here too - in some new flavours - and they'll be introducing a new dessert "a dessert-sized tribute to Ferrero Rocher" alongside Roast Peach with Lime Ice and a Summer Baba (soaked with Hawksmoor Fruit Cup).

Hawksmoor Knightsbridge (as it will be known) opens 3 July at 3 Yeoman’s Row, London SW3 2AL. Bookings are now open online on the Hawksmoor website. Sadly for their legions of fans they won't be doing a soft launch, but if you dine there in July or August you will enjoy a round of champagne on the house.