Hawksmoor heads to Manchester for their next restaurant 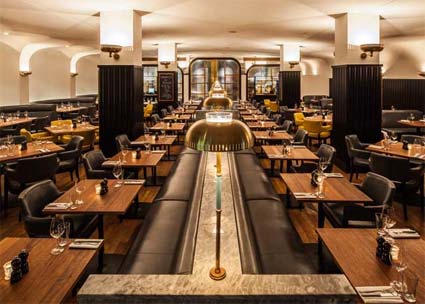 Manchester is about to get another big-name restaurant as one of London's finest, Hawksmoor (who have only just launched Hawksmoor Knightsbridge - pictured), are set to open there next year.

They're opening in the Courthouse in the centre of town and, as Huw Gott says, "We love opening restaurants in heritage buildings, and the Courthouse is a beautiful late Victorian building. I hope we can do something there that does it justice. We always try to adapt what we do to the local area, and we’ll be aiming to do something Manchester can be proud of.”

Hawksmoor's Will Beckett says "We’ve been up to Manchester quite a few times over the last couple of years. It’s a very cool, laid back and friendly city and the restaurant and bar scene there is really starting to take off. We think Hawksmoor's combination of good food, drinks, hospitality and casual atmosphere will fit in really well there."

So, from 2015 you can expect the mix of steak, seafood, salted caramel rolos and a chance to down a Full Fat Old Fashioned outside of London.

Hawksmoor Manchester will open at 184-186 Deansgate, M3 3WB in 2015. For more information, follow them on Twitter @hawksmoormcr

And read our latest Test Drive on the most recent London opening - Hawksmoor Knightsbridge.