Hawksmoor Fish & Chips, Tim Anderson does M1LK and more in our round-up 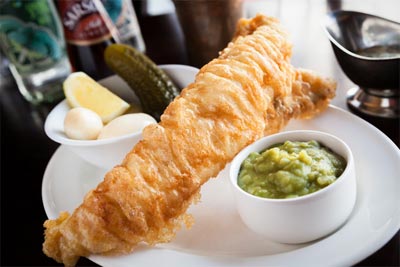 London's busier than ever and we've so much news about London's restaurants and dining scene that we'll be catching up with them all in our semi-regular Friday round-up. Here's what we discovered this Friday...

Hawksmoor are bringing fish & chips to the Air Street lunchtime menu from next week. According to them, we can expect "Dripping-fried Whiting, in batter that Richard may have 'borrowed' during his many years working for Marco Pierre White, and homemade tartare sauce, along with a wally (gherkin), pickled egg and a few pickled onions." Find out more about Hawksmoor Air Street.

Former model Ruth Spivey is launching a "Wine Car Boot" at Netil Market on September 1. She's joining up with some top sellers including Bottle Apostle, Borough Wines, Planet of the Grapes, Noble Fine Liquor, Roberson Wines, Sweet Thursday & Wine Chap. Alongside the wine there will be some top street food traders including fin and flounder, Breddo's and more.

It sounds like a pretty good deal as tickets are £15 on the "door" and that includes 10 samples, a wine bottle carrier, a specialist Govino outdoor tasting glass and a bag of Portlebay Popcorn Kracklecorn too. For more details, follow @WineCarBoot on Twitter.

Rawduck in Hackney is kicking off a series of events. They'll be working with top chefs tasked with creating a meal without the benefit of a traditional kitchen - coffee machine and panini press are the only luxuries on hand. Mark Hix is the first chef lined up and he "promises poaching on the coffee machine and a lot of smoke ‘n’ spices on the panini".  More guests later on include Tim Noble and Sue Webster, author and cook Jo Jo Tulloh, Nuno Mendes and Julian Biggs.

It's a Friday, so that means it's Street Feast at Dalston Yard. And tonight's sees Quality Chop House joining them for the first time. They'll be cooking up confit lamb ribs and Longhorn mince with dripping croutons and mustard watercress. For more details, follow Street Feast on Twitter.

Over in Balham, Nanban's Tim Anderson is gearing up for a new pop-up with M1LK with some pretty special dishes:

It's £35 a head, with craft beers and whiskys on hand to wash all that down. For more details and tickets, go to their blog.

Bonnie Gull Seafood shack are taking over the Wildlife Trust’s Camley Street nature reserve in King's Cross for a special sustainable BBQ feast. The will be setting food stations around the nature reserve including:

The event is on Friday September 6 from 6-10 pm. It'll be £50 with all profits donated directly to the Wildlife Trust. Tickets are available here.

There are also some great soft launches on at the moment too. There's the special 50% off food offer at Coal Vaults for Hot Dinners readers and another at the Gin Joint in Barbican. And don;t forget that the soft launch at Le Coq is still running tonight.

And don't forget all the rest of the stories this week.  We just added what we're calling our Sidebar of Scran over there on the right of this page - so for new openings and more - cast your eye over that...