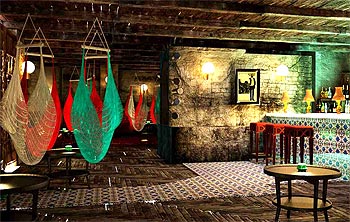 Guy Pelly, the man behind Mahiki and Chelsea nightclub Public is about to open a huge Mexican bar and restaurant on Sloane Square. Tonteria, which he'll open with fellow nightclub entrepreneur Marc Burton, will feature a Mexican inspired menu and large range of cocktails.

Early evening drinks will be served from a cocktail drinks trolley with the barman making drinks by your table while - as anyone familiar with his previous places will expect - there are also sharing cocktails including glasses in the shape of skulls or those in the shape of the masks used by Mexican wrestlers (yes we were boggling at that one too!).

The huge basement bar, with capacity for 200 folks, will be open 6 days a week from 5.30pm until late. Food wise, there'll be a light food offering of small plates and sharing platters.

“I don’t like places that take themselves too seriously," is how Pelly describes his plans for Tonteria which is presumably the ethos behind a shot train which delivers tequila shots to the table, hammocks for chair and piñatas for guests celebrating birthdays.

"The food and frozen margaritas are great." Guy Pelly reveals his favourite London restaurants to us.