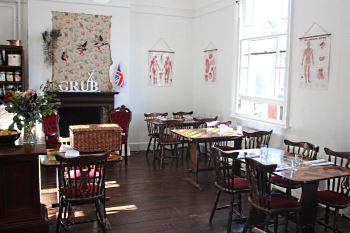 Home grown British food has undergone a major revival of late; never has our national cuisine been so widely lauded. And that love affair looks set to continue with the opening of GRUB, a British-themed restaurant situated in the upstairs dining room of The Bethnal Green’s Working Men’s Club.

Dinner will feature terrines, pies, stews and a host of other nostalgic dishes. Head down on a Sunday for a slap up roast with all the trimmings; roast beef, Yorkshire puds, pickled walnuts, and duck fast roasties washed down with one of their ‘secret recipe’ Bloody Grubby Marys.

Good quality produce is GRUB’s highest priority - all ingredients are sourced locally with some even foraged from nearby Victoria Park. With restaurant-goers wanting to become more and more aware of where the food on their plate comes from, Grub believe it’s all about supporting local, ethical and organic independent suppliers.

Open since 1953, the building itself is a former doctors clinic and attracts a range of eclectic clientele, from the old working members to actors and hipsters from nearby Columbia Road. Restaurant Manager, Melanie tells Hot Dinners: ‘The food emulates the working class roots of the club, we wanted to stay true to its history but put a modern spin on things.’

Plus, if you feeling like a dancing off your dinner you can head downstairs to the bar where the party really starts.