Grey Goose launch their awards cocktails at the Rosewood London 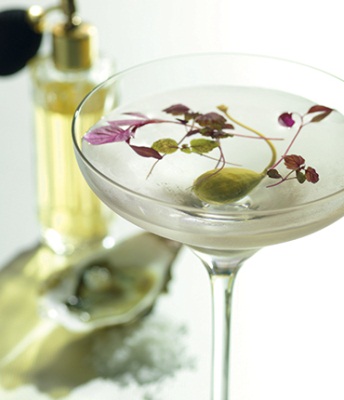 This weekend sees the start of five days of A-list craziness as celebrities fly into London for Fashion Week and the BAFTAs, swiftly followed by the BRITS. And one drinks company is doing its level best to cater to their needs by hosting some of the key parties.

Grey Goose vodka invited us over to the Manor Club at The Rosewood London to check out four new cocktails they'd devised for the awards season. Each was created by the company's master mixologist Joe McCanta who talked us through the movie inspiration for each one. We loved The Cosmonaut, made with GREY GOOSE Le Poire, ginger liqueur and cardamom bitter and served with a huge moon-shaped ball of ice which took Gravity for its inspiration.

But our favourite was Joe's Martini de le Mer - inspired by the seafaring movies in competition this year such as Captain Phillips. This was a vodka martini where the glass was sprayed with Noilly Prat which had been infused with oyster shells and a touch of fleur de sel. Instead of an olive there was a caper berry and the finishing touch came with some sprigs of micro-shiso herbs floating in the drink to give the impression of a rock pool. Clever, beautiful to look at and all too drinkable.

But what, you may ask, is the point of hearing about what a lovely time we had trying these drinks, when the only other people who'll get to try them are the guests at Harvey Weinstein's after-BAFTA party which is being held at the Rosewood on Sunday night? Well the good news is all the drinks are available downstairs at Scarfe's Bar between 16 February and 2 March. The bad news is that if you're not holding a BAFTA you'll have to pay for them.